Back in business: by Thursday, Perrotin gallery had sold two-thirds of its stand at Art Basel. Hauser & Wirth, Thaddaeus Ropac and Lévy Gorvy made big-ticket sales at the VIP opening
Photo: Kabir Jhala

At the first edition of Art Basel since June 2019, dealers voiced relief at the return to business as usual and notched up some seven-figure sales during the VIP opening. Yet some say the pandemic has prompted them to rethink their dependence on international art fairs and made them reluctant to return to their hectic pre-coronavirus travel schedules.

As the first major European art fair since lockdowns were imposed in March 2020, Art Basel is viewed as a litmus test for a European art market that has taken a severe hit over the past 18 months. With Frieze London, Fiac and Art Basel in Miami Beach all scheduled before the end of this year, the success of Art Basel may be reassuring for other major fairs.

“Fairs are still essential,” says Franck Prazan of Applicat-Prazan in Paris. “But there is a question over which ones to keep participating in. Would I still want to travel eight times a year? I’ll have to be selective. There are life considerations which I did not take account of before Covid—you have to establish your priorities.”

We have a phygital future—both digital and physical
Iwan Wirth, co-founder, Hauser & Wirth

In the years before the pandemic, fairs accounted for nearly half of dealers’ annual sales, according to the Art Basel and UBS Global Art Market Report published in March this year. In 2020, that figure plunged to just 13%, with nearly two-thirds of the scheduled art fairs cancelled. Lockdowns forced galleries, collectors and auction houses to retreat online. As a consequence, the global market for art and antiquities slumped by 22% to $50.1bn in 2020—the biggest dip since the 2009 recession.

The return to real-life Art Basel (after ten online viewing rooms) heralds a new beginning—at least from a sales perspective. On the first VIP day of the fair on Tuesday, Thaddaeus Ropac sold a Robert Rauschenberg work, Rollings (Salvage) (1984), for $4.5m. Hauser & Wirth’s big-ticket sales included a Philip Guston painting for $6.5m and a David Smith sculpture for $5.5m. Lévy Gorvy sold a painting by Ellsworth Kelly for $3.5m and a new painting by Günther Uecker made especially for Art Basel for €1.6m. 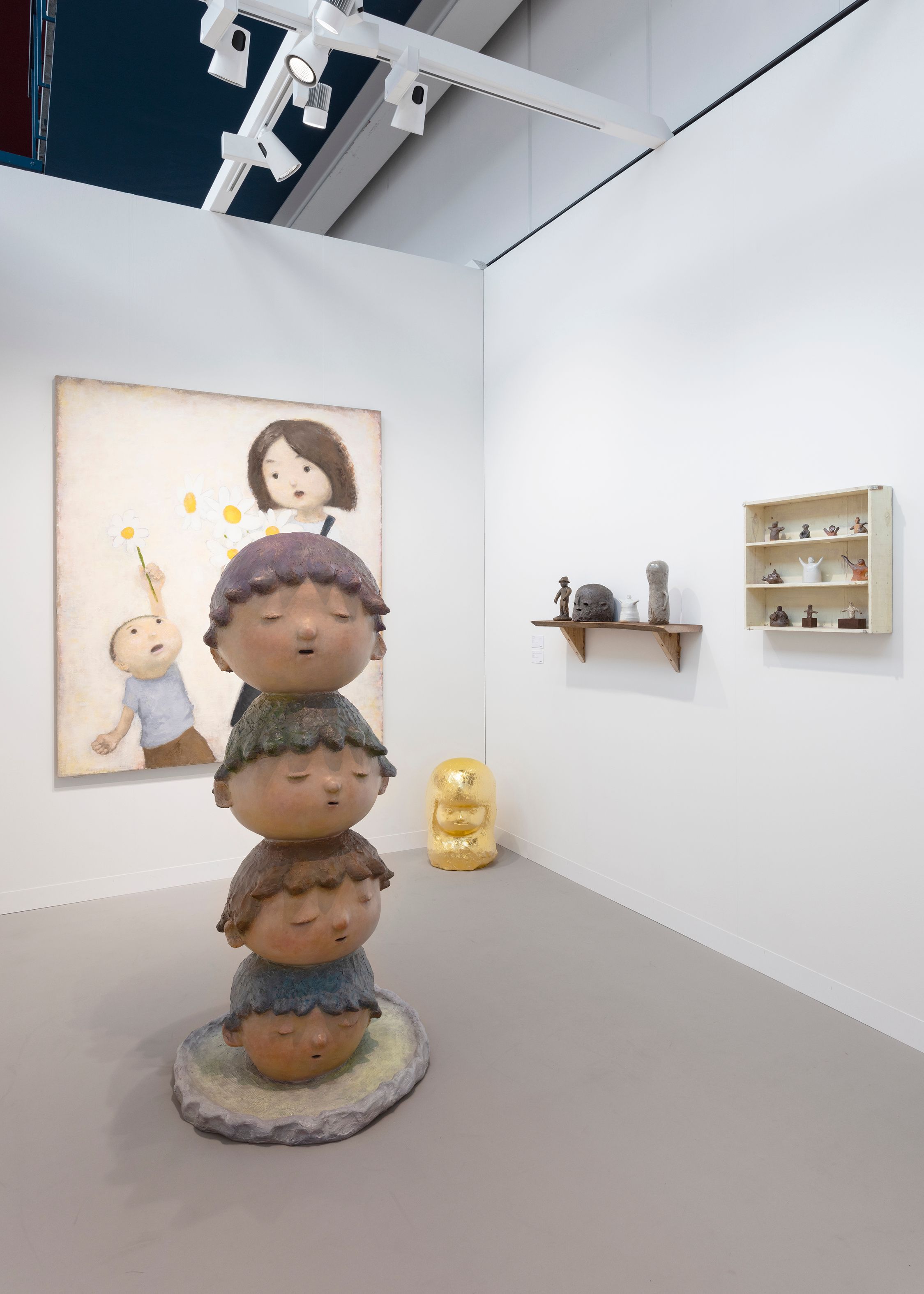 Otani Workshop’s pieces on Perrotin’s stand at Art Basel. Continuing travel restrictions meant US collectors were thin on the ground
Courtesy of Perrotin

“So many deals happen here,” says Emmanuel Perrotin, a Paris-based dealer who had sold two-thirds of his stand by Thursday. “We do art fairs to give a voice to our artists and to introduce new artists to collectors and curators. Some dealers complain; I say to them you don’t need to participate any more! If people want to do fewer fairs, there are always people who will take their place.”

Yet even after this week’s successes, Hauser & Wirth’s co-founder Iwan Wirth believes that “art fairs will play a lesser part in our business model”. He predicts “a phygital future—both digital and physical”, adding: “We still need to find out what sort of physical experience people want.”

Several dealers confessed to pre-Art Basel jitters. “We had no idea what to expect and we were very worried and, honestly, pretty scared,” says Stefan von Bartha, a Basel dealer. He sold two works moments after the fair opened—one by the Swiss Dada artist Sophie Taeuber-Arp and the other by her husband Hans Arp. “We weren’t anticipating [the fair to be] so successful,” Von Bartha says.

In an attempt to calm nerves among exhibitors in early September, Art Basel wrote them a letter affirming it was “committed to hosting the fair under the current conditions because we firmly believe that we can do so safely”. Fair organisers were responding to a letter in which a number of powerful US-based galleries expressed concern about participating after US authorities issued a do-not-travel advisory for Switzerland.

“I was very worried from a Covid-confident point of view and how responsible it was to have a fair at this moment,” says Alison Jacques, a London dealer. Still, on the first day of Art Basel, she sold a Sheila Hicks textile work for $600,000 and a Dorothea Tanning painting priced at $350,000.

Although the pace of the fair is less frenzied than in previous years, “that does not mean business is slower”, Jacques notes. “We met European collectors at a level which has made this a great fair and we have had time to talk to people. We will get a lot in the long term out of this fair.”

One first-time exhibitor, Edouard Malingue, flew in from Hong Kong where there is a compulsory 21-day hotel quarantine for arrivals. “We have to be careful where we go and we have to reduce the amount of travelling we do,” Malingue says. “But [Art Basel has] been amazing.”

Several dealers observed that US collectors were thin on the ground in light of the travel restrictions. Dominique Lévy, the co-founder of Lévy Gorvy, suggests the more regional flavour of this year’s fair may point the way forward.

“You can’t expect people to travel as easily, certainly in the near future—and that might become a change of habit,” she says. “We can’t jump on planes so easily, because of the time and money and health toll. We will absolutely not be going to as many fairs. We were already questioning it before the pandemic.”

Some dealers opted out altogether this year. Although she expects to return to Art Basel in future, Sylvia Kouvali of Rodeo in London says the gallery had decided before the pandemic to reduce its overall fair attendance.

“It is not strategy but a matter of quality of life,” Kouvali wrote in an e-mail. “We have reduced our lifestyle to a slower, in-depth way of being. Someone reminded me that in June 2019 we were all exhausted and complaining. We don’t want to go back there. And we are not doing any other fairs in 2021.”

Sunny Rahbar, the co-founder of the Dubai-based gallery The Third Line, echoes those sentiments: “We didn’t participate in Art Basel this year as we are still not ready to do international art fairs, we are still working out the post pandemic situation and it was too soon for us.” For now, the gallery will stick to doing Art Dubai and Art Abu Dhabi and, while it plans to return to international art fairs in the future, it “will be much more strategic in which ones and where, and we will be thinking of ways in which we can sustainably do so”, Rahbar says.