Global art and antiques sales shrank by 22% to $50.1bn in 2020—the biggest dip since the 2009 recession when sales totalled $39.5bn, but a less steep decline than the 30%-40% slump expected in a year when the relentlessly event-driven art world practically ground to a halt. These are the findings of the latest Art Market report, published today by Art Basel and UBS.

Describing the pandemic as “a particular kind of crisis”, the report’s author Clare McAndrew says: “It is not the same kind of recession as we have seen in the past. Certain industries and pockets of economically vulnerable people will really, really struggle for the next few years. But the rich have got richer, and, whether we like the sound of it or not, it has been beneficial for the art market.”

Without the distractions of glitzy holidays and the spending on luxury goods that accompanies such activities, high-net-worth (HNW) individuals were more motivated to buy art— 66% of those surveyed reported that the pandemic had increased their interest in collecting. Millennial HNW collectors were the highest spenders in 2020, with 30% having spent over $1m versus 17% of Boomers. 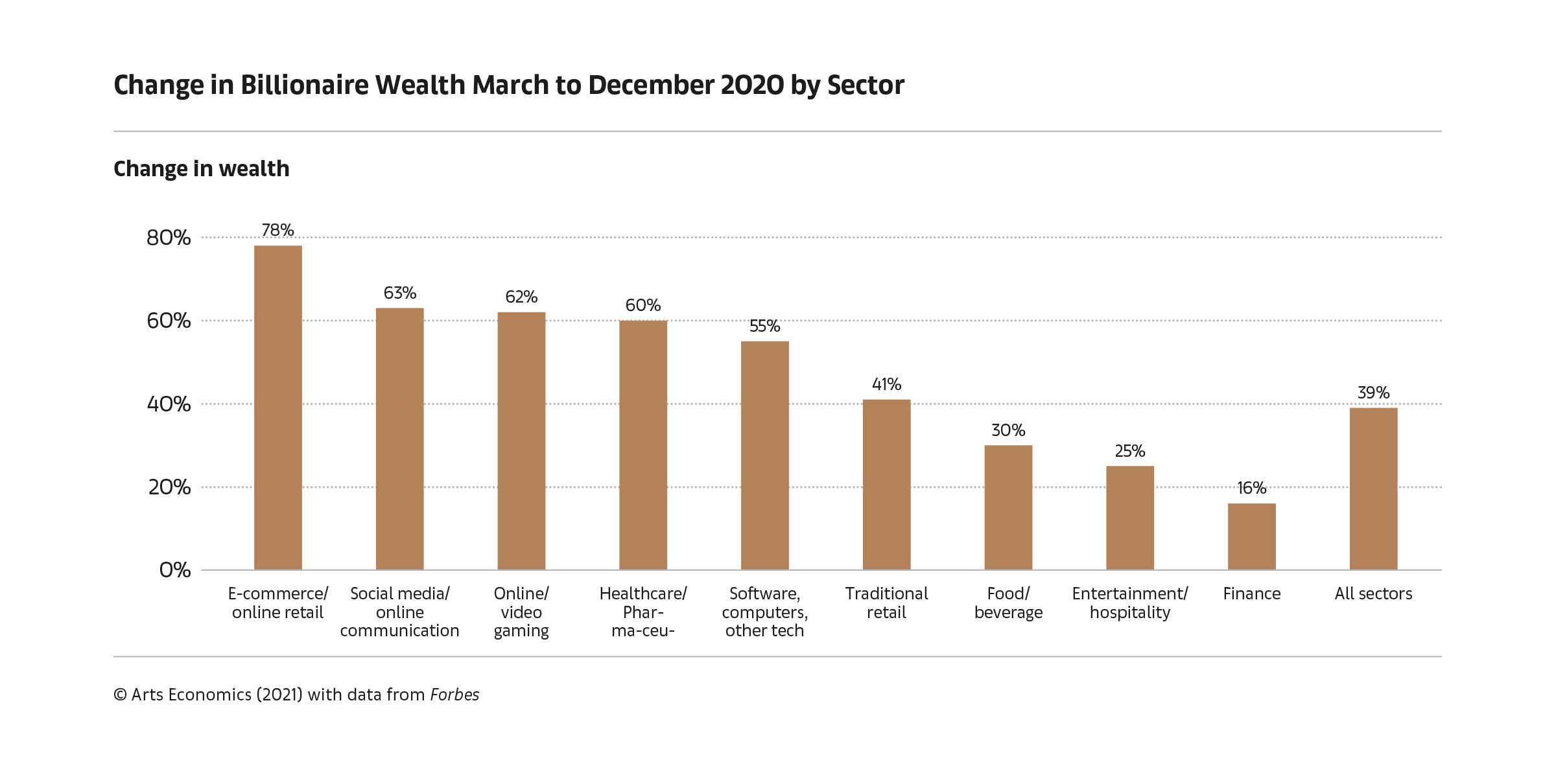 How the rich get richer

The tell-tale finding of this year’s report is the rapid ascent of online sales, which doubled in value from 2019 to 2020, reaching a record high of $12.4bn—a quarter of overall transactions.

It was the year the term OVR (online viewing room) truly entered the art market lexicon, though dealers struggled to sell via these websites. Such sales only accounted for 9% of their income.

The rule of thumb in recent years is that art fairs accounted for nearly 50% of dealers’ annual sales; in 2020, that figure declined dramatically to just 13%. Nonetheless, the reduced costs associated with participating in art fairs (24% of expenditure in 2019 compared with 10% in 2020) meant some dealers managed to maintain profitability.

Auction sales were down 30%, with many firms facing significant challenges pivoting online, particularly given the slower nature of online sales and the difficulty generating a buzz in an empty saleroom. At auction, Greater China (meaning Mainland China, Hong Kong and Taiwan) overtook the US to become the largest market, with a share of 36%. The US accounted for 29% and the UK 16%.

Despite a difficult start to the year, strong auction sales in the last quarter helped boost Greater China to a position of parity with the UK art market (20% share each), and second in the global ranks overall. The US remains the trade’s dominant centre with a 42% share. This despite facing its worst recession in 50 years with GDP down 3.4%. 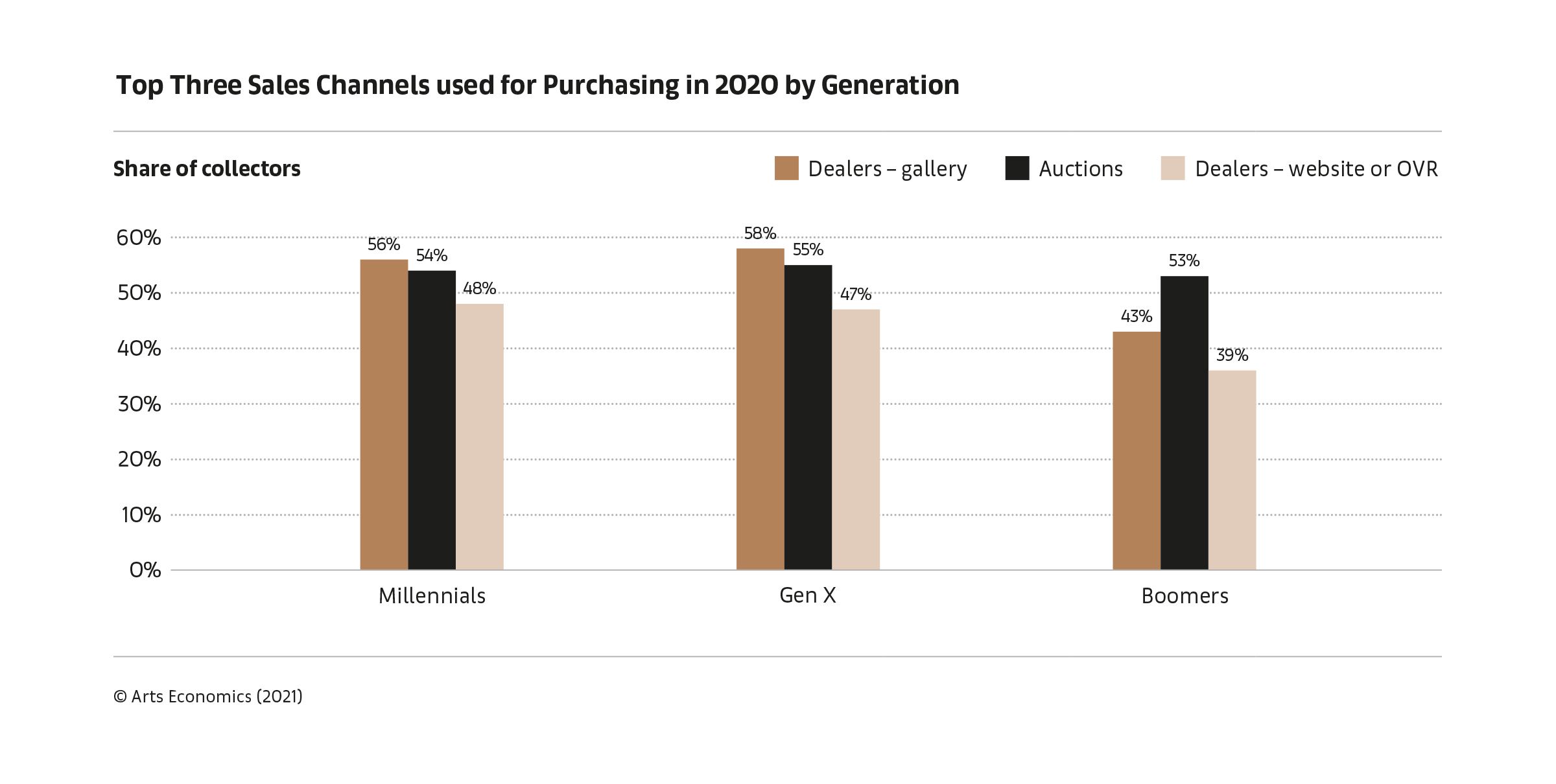 Millennial HNW collectors were the highest spenders in 2020

One of the biggest casualties of 2020 has undoubtedly been art fairs. Of 365 fairs planned globally for 2020, 61% were cancelled. The future prognosis is mixed. Less than half of the HNW collectors surveyed said they would be willing to go to an art fair in the first six months of 2021, although 64% said they would be ready to attend local events.

Meanwhile, dealers are also choosing to do fewer fairs. In 2016 and 2017, they averaged five fairs per year while in 2021 they plan on three.

McAndrew thinks it is unlikely “big international events” will happen in 2021, though there is appetite for smaller, regional fairs. “Art Basel in Hong Kong will be quite a regional thing. Collectors coming from wherever gateway travel allows will probably be enough to to support a local fair,” she says.

One of the biggest challenges facing galleries is developing new relationships with collectors in the absence of live events. As McAndrew says: “You might get a one-off buyer online, but it’s hard to develop that into a regular thing without having the same kind of personal contact. Dealers in particular will miss the fairs if they don’t kick back in this year. If their base isn’t refreshed it will put the squeeze on them over time.”

Indeed, the extent of the squeeze is unlikely to be known for some months or even years to come. The report suggests just 1% of galleries have closed as a result of the pandemic, though McAndrew acknowledges those at greatest risk of closure are unlikely to have taken part in her survey.

Employment in the gallery sector fell 5% year-on-year and 2% in the auction sector, while employment at the top-tier auction houses is estimated to have fallen by 13%.

But, as McAndrew writes in her report, “Calculations regarding employment and business structures carried out at the end of 2020 are, however, likely to understate significantly the true impact of the crisis, with business closures only occurring after a period of time, particularly as some businesses have been maintained through public support programmes. As these are phased out, it is likely that more businesses may not be able to continue to operate.”

As the art world continues to be radically reshaped by the pandemic, other trends are emerging as a result of the accelerated shift online. NFTs (non-fungible tokens) are the latest craze, though given that they are such a recent phenomenon, they are not covered in this report.

McAndrew notes, however, that such digital innovations could make it more and more difficult to keep tabs on the ever-opaque art market. She says: “For the past ten years or so, my report has always focused on the traditional art market—galleries, dealers and auctions. But the amount of money now being turned over via other platforms is enormous. I’ve never covered, for instance, if an artist sells directly to a collector, or collectors sell between each other. It could be that the $50bn-worth of sales reported this year becomes a smaller and smaller portion of what’s actually going on.”