Most are agreed that art fair online viewing rooms are pretty dry affairs, viewers stifling yawns as they click on yet another jpeg. So one exhibitor at Tefaf Online this week (1-4 November, preview 30-31 October) has turned to virtual reality (VR) to try to enliven the experience.

Since August, the London-based antiquities specialist ArtAncient has been working with White Crow Projects, a design consultancy, to create a VR experience of a late Hellenistic (around 1st century BC) marble bust of Hercules that it will be showing, with a seven figure price tag. The 280 Tefaf Online exhibitors are only allowed to present one, vetted item each (the remote vetting process would otherwise be too arduous), so ArtAncient has thrown all its efforts into this project—while Costas Paraskevaides, the gallery’s founder, declines to say how much the experiment has cost, he says it has been a “considerable investment in time and money.”

The gallery bought the ancient Greek bust in February when it turned up at Adam Partridge Auctioneers in Macclesfield, Cheshire, when it was described as being a late 18th- or early 19th-century bust of Hercules. The consignor was a former gardener who had dug it up in around 1984 while working at Sutton Place in Surrey—the then-owner of the property, the art collector Stanley Seeger, had said he could keep it. Although only estimated at £600 to £1,000, the marble head soon piqued the interest of the antiquities trade and it was bought by ArtAncient for £320,000 (with fees).

“We wanted to do a really creative stand for an art fair but we’ve been frustrated as there’s not an opportunity to do it due to the pandemic,” Paraskevaides says. “Denis [Moiseev of White Crow Projects] suggested we use photogrammetry to create an immersive VR experience instead. We started photographing the head in late August—we needed about 1,500-2,000 images of it which are then digitally ‘stitched together’ to create the 3D model. It’s not for the fainthearted, it’s been a labour of love.” 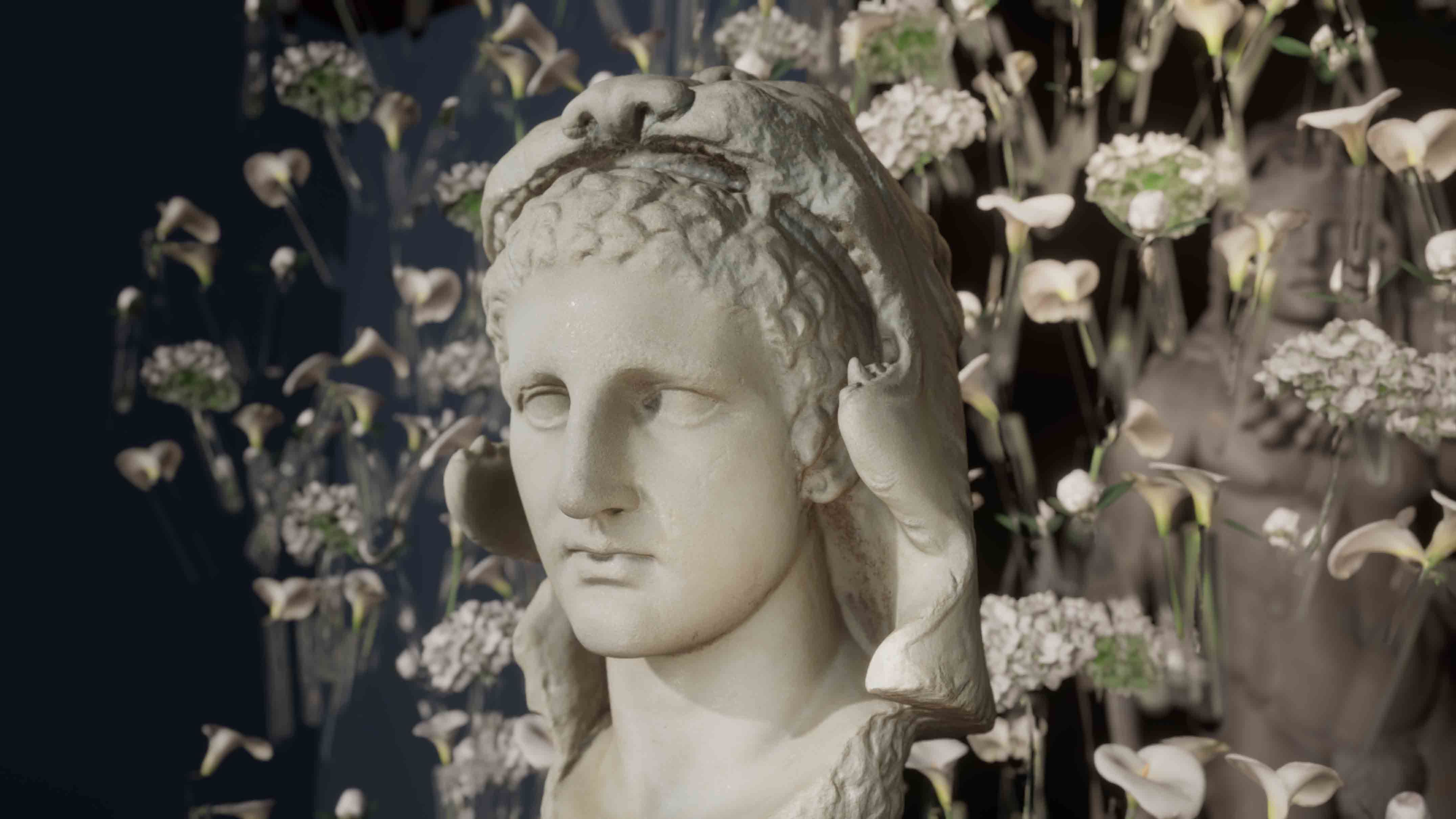 The late Hellenistic bust of Hercules, seen here surrounded by VR tulips, was dug up by a gardener in 1984
Courtesy of ArtAncient

The bust will appear in a VR version of one of the panelled rooms at New York’s Park Avenue Armory, where the physical edition of Tefaf New York Fall should have been held—were it not cancelled due to the pandemic. To recreate the full floral Tefaf experience, ArtAncient went as far as to order a load of tulips in test tubes from the fair’s flower supplier, Ten Kate in the Netherlands. These have also been photographed over 1,500 times each to create 3D models that are then used to virtually line the stand as a backdrop to the bust.

The stand can be viewed on a desktop computer but the experience will be all the better using a proper VR headset. So, in addition with the online fair, ArtAncient has hired a gallery space at 5b Pall Mall in St James’s, London, to host The Sutton Place Hercules: a VR Exhibition (2-8 November, 11.30am to 7.30pm), where people can make an appointment to view the experience using an Oculus headset.

Paraskevaides believes this VR technology also has the capability to improve transparency in the complex field of antiquities as, thanks to being scanned under UV light, it enables the viewer to virtually “peel away” two levels of restoration, done in the 19th century and more recently. The technology also enables the head, which is a fragment of a larger sculpture, to be viewed alongside three comparable full sculptures—one in Athens, the other two in Italy—to contextualise it. And to add a human touch, alongside this will be a video interview with the gardener who discovered the head at Sutton Place.

Moiseev points out that the technology used to create this VR experience has only been available for a matter of months—the just-released Facebook Oculus headset and the high fidelity Nvidia graphics card, launched only a few weeks ago and is now sold out almost everywhere, Moiseev says (it cost around £2,000 to get hold of one).

While this technology is, for now, expensive and often hard to get hold of, Moiseev believes this will quickly change: “Soon this is going to become mainstream. What we’re trying to do here is create a blueprint of how VR might be used in the art world—in five-years-time there will be some really interesting immersive experiences being produced by galleries.”