Gallery hopping was go last weekend in China’s capital city with the fifth edition of Gallery Weekend Beijing (GWBJ, 22 April to 2 May), featuring 30 local galleries and museums as well hosting popups by eight visiting galleries from other cities.

The event, kicking off with three days of VIP programmes and parties, was moved from its usual March dates after several small outbreaks of Covid-19 in the city last winter.

“Moving it from March meant double the work for us, we had to do everything all over again, which took a lot of time. With some 30 galleries, we couldn’t expect them to change their exhibition schedules, and upend their annual plans. Still about a third were able to hold their openings this weekend,” says the GWBJ director, Amber Wang. “Collectors are very supportive, the shows are a good quality, and the schedule was quite balanced this year. People were still eager to come, including from outside Beijing.” The event kicks off a busy season for the city, followed by Art Beijing next week (30 April to 3 May) and JingArt in summer (10 to 13 June).

After a scaled down edition in 2020, GWBJ has returned to its standard expansive scale with city-wide participants and big in-person galas and live talks, though retaining digital components as well. The 798 complex requires temperature checks but not health codes, which were only checked at the larger public venues like the 798 Art Centre; at most galleries even masks and distancing are decreasingly required. While travel within China is now unrestricted, entering the country remains difficult and Beijing currently requires a 21-day quarantine. 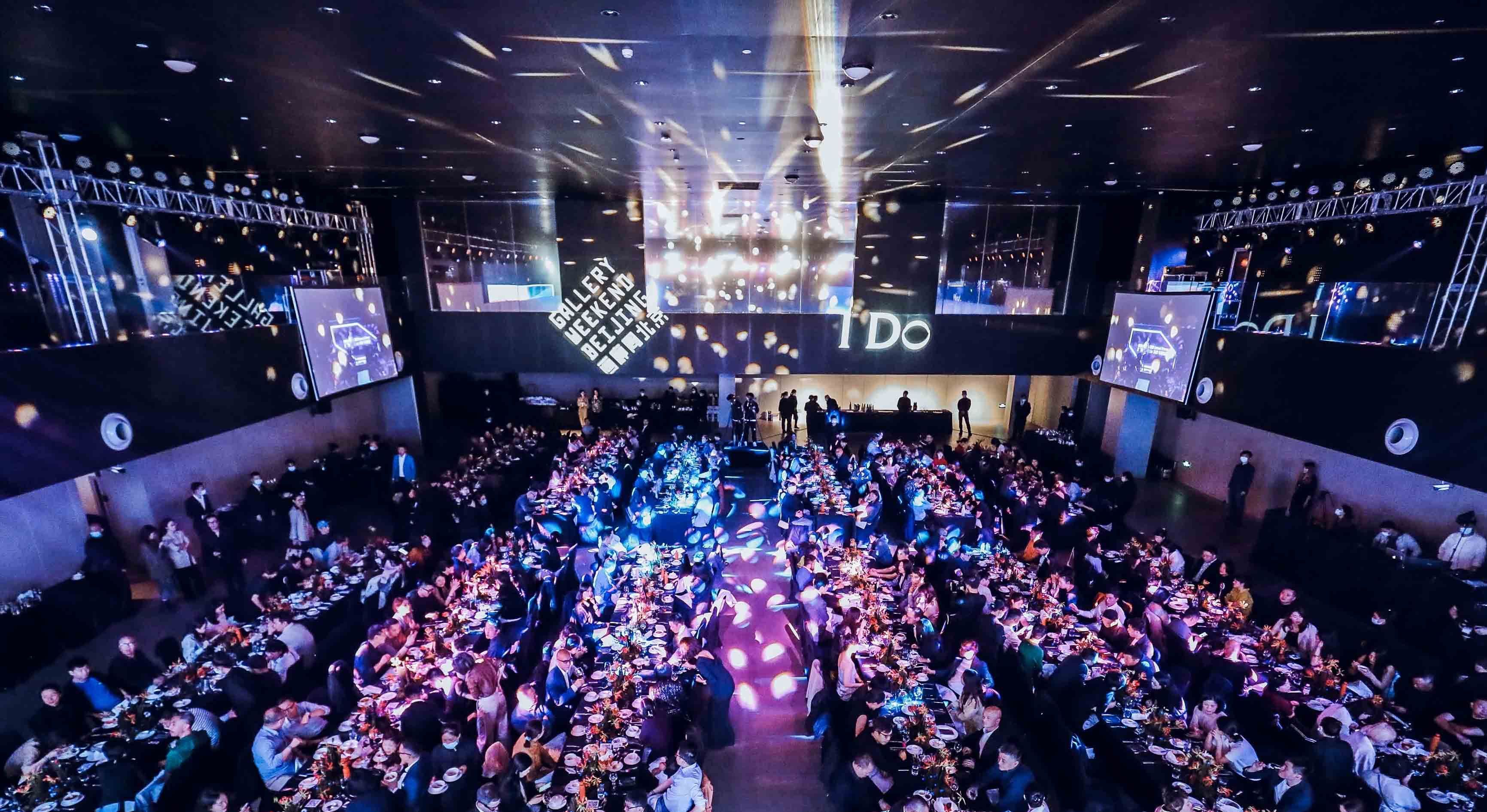 The GWBJ gala on 24 April
Courtesy of Gallery Weekend Beijing

This prompted GWBJ to this year expand its “Visiting Sector” of guest galleries utilising extra spaces in 798. Gladstone Gallery, which has locations in New York and Brussels, has its own space, while Shanghai’s Bank and Paris’s Balice Hertling share a specially renovated extra building in the complex. The rest—Chengdu’s A Thousand Plateaus Art Space, London’s Pilar Corrias Gallery, Shanghai and Hong Kong’s Edouard Malingue Gallery, Hong Kong’s Aye Gallery and Guangzhou’s Canton Gallery—have set up in the 798 Art Centre. The visiting exhibitions will run until 20 May, for a cost that gallerists describe as a quarter that of a major art fair. Guangzhou’s Vitamin Creative Space also opened a pop-up exhibition in a 798 space, of painter Wang Yin (until 5 June), unaffiliated with GWBJ but in partnership with its parent company Beijing 798 Creative Industry Investment Co.

“Personally, I believe that the planning and production of the exhibition projects are the core of the gallery week, while the fairs are more about sales,” says Liu Jie, the founder and art director of A Thousand Plateaus. ” Gallery Week runs for a month and also allows guests to take a more leisurely look at the exhibition, getting to know the project and the artist, which is especially important in today’s age of deluge.” Liu says he has considered joining GWBJ previously, but was unable to due to its usual scheduling right before Art Basel in Hong Kong. “This year we brought photography, video, installation and live projects by three artists: Chen Qiulin, Cang Xin and Li Lang,” Liu says. “Generally speaking, our sales will be difficult without [exhibiting] painting. Happily there still have been some sales, and they are all very serious and professional collectors.”

Last year, GWBJ was entirely contained within 798, but this year saw the inclusion of art spaces far flung around Beijing, including Inside-Out Art Museum and Shixiang Space. One gallery from the dwindling population at cluster Caocangdi joined: ShanghArt Beijing’s presentation of Sun Xun’s 2016 Guggenheim commission film Mythological Time and related drawings, about his waning coal-producing hometown Fuxin, was among the strongest presentations. Another powerful environment-focused show was the Karen Smith-curated Zhuang Hui project Qilian Range, Redux (until 27 June) at Galleria Continua, in 798. That main complex also features 18 public art works and projects, by artists including Huang Rui and Chen Qiulin (all until 23 July). The show stealer is Luo Fuxing and Ye Funa’s interactive The Smart Gallery, based around the popular lowbrow street fashion shamate (slang for “smart”), a temporary salon giving participants the sort of over-the-top hair stylings that signify the subculture, to look smart for summer arting.