The Scandinavian artist duo Elmgreen & Dragset, whose sculptures and installations broach consumer culture and sexual politics with mordant humour, have unveiled a new piece at Art Basel’s Unlimited, the fair’s section devoted to oversized art—the first time a work from there has been shown outdoors. The Art Newspaper caught up with Michael Elmgreen and Ingar Dragset at the fair to discuss the work, and accompany them on a tour of their favourite artists exhibiting at Art Basel.


Elmgreen and Dragset’s The Outsiders (2020)
Courtesy of the artists and Pace Gallery.

Consisting of a vintage Mercedes Benz with a Russian licence plate parked a stone’s throw from the Messeplatz, The Outsiders (2020), shown by Pace, is easily missed by rushing fairgoers. But should one stop to peer through the car’s windows they will see highly realistic sculptures of two half-naked young men spooning each other. Around them are packaged paintings (real, editioned works by Elmgreen & Dragset), as well as empty bottles of beer, crisp packets and two access passes to this year’s fair, encouraging viewers to imagine the men as weary art handlers. “We wanted to draw attention to the hard work of people who make these fairs run,” says Michael Elmgreen, adding: “They have driven from Moscow to a city where they can be openly gay. Homophobia in Russia has definitely gotten worse in recent years.”

The work also functions as a wry nod to the expense of accommodation in Switzerland. “We can hardly afford a hotel room in Basel if our gallery isn’t putting us up,” Ingar Dragset jokes. Moreover, it even draws partial inspiration from a real-life experience: Elmgreen recalls sleeping overnight in a car with the artist Olafur Eliasson during Documenta 9 in 1992, but “nothing happened, not even spooning. He’s open minded but maybe not in that way”. 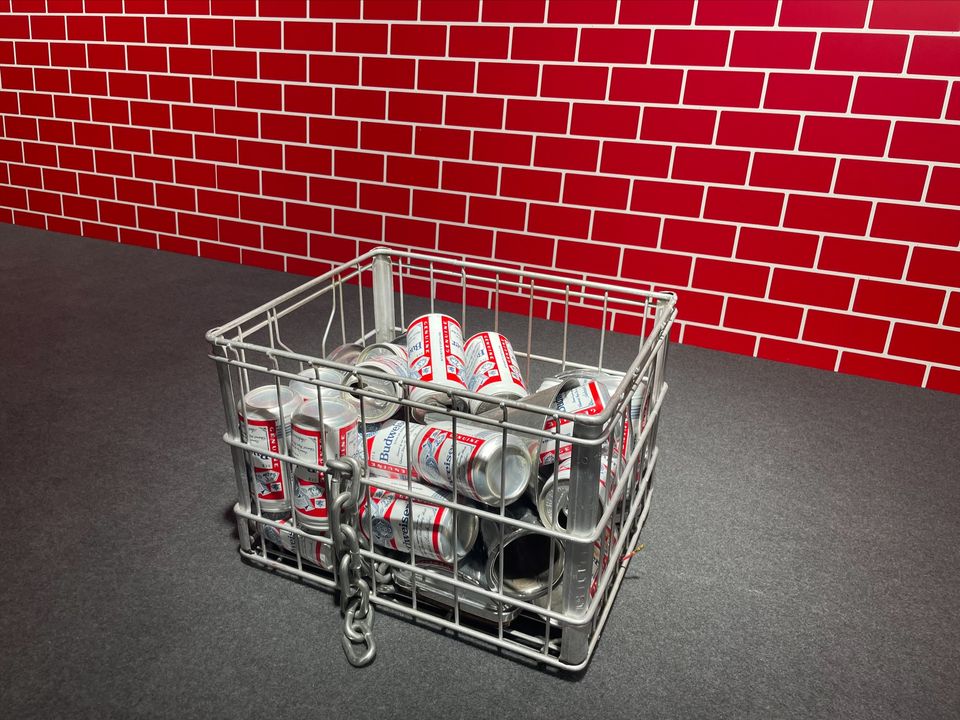 Michael Elmgreen: Cady has been one of our greatest inspirations since we started and this work is a great example of her practice, in which she combines things like flags, beer cans with base elements such as grocery baskets and handcuffs. We’ve always been amazed by how she puts together simple readymades with highly crafted installation works to create such a fantastic critique of the American society, and explain the anxieties of her times. We were in ecstasy when we went to her 2019 survey show at the Museum für Moderne Kunst (MMK) in Frankfurt, we could hardly leave the museum.

Ingar Dragset: When you critique American culture you are naturally critiquing consumer culture too, and all the politics behind that and the liberalism that comes with it, which is not easy. But Cady, in such simple and clear ways, finds ways to do all that and still have her work hit you in a visceral sense. The haphazard combination of objects, such as the funnel with the beer cans, creates these quietly surreal aspects to it—her works always contain an openness to interpretation.

Elmgreen: Never has a basket full of Budweiser beer cans looked this way. 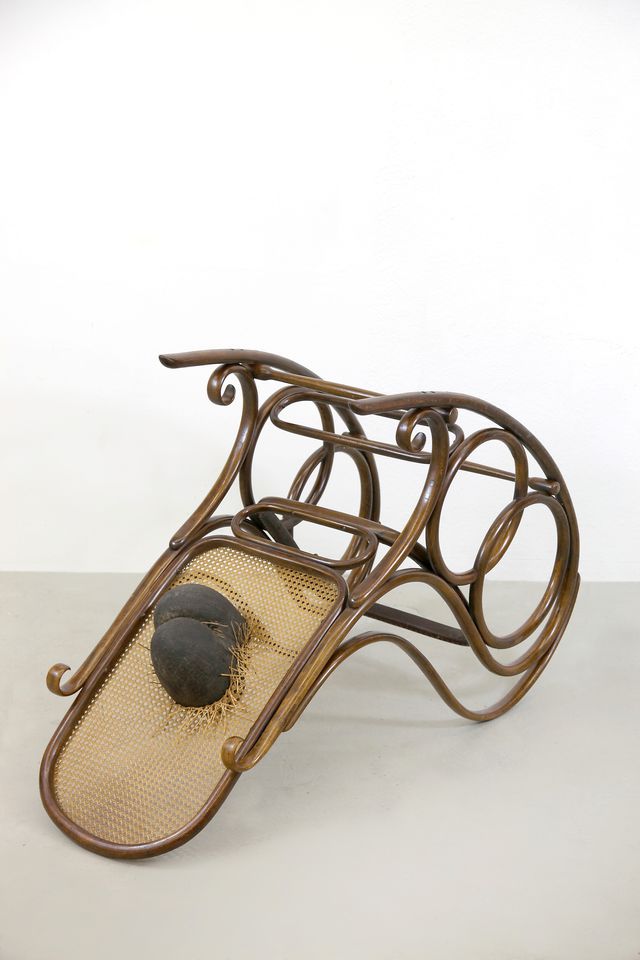 Dragset: A fellow Scandinavian, Nina Beiers is Danish and also lives partly in Berlin, and she creates these simple, surreal sculptures such as Female Nude (2018), an upturned, wooden rattan chair embedded with a giant coconut seed. I always find her work surprising—and it contains this strange combination of masculine and feminine associations. There’s so much forceful penetration here, you feel a sexual energy, but also you can’t exactly point to it because it happens in your own mind. Maybe these works would be less effective if they were placed upright, but instead she puts you on shaky ground and forces you to rethink. We recently placed Nina in a group show of 29 artists that we are curating at a new institution in my hometown of Trondheim, Norway. 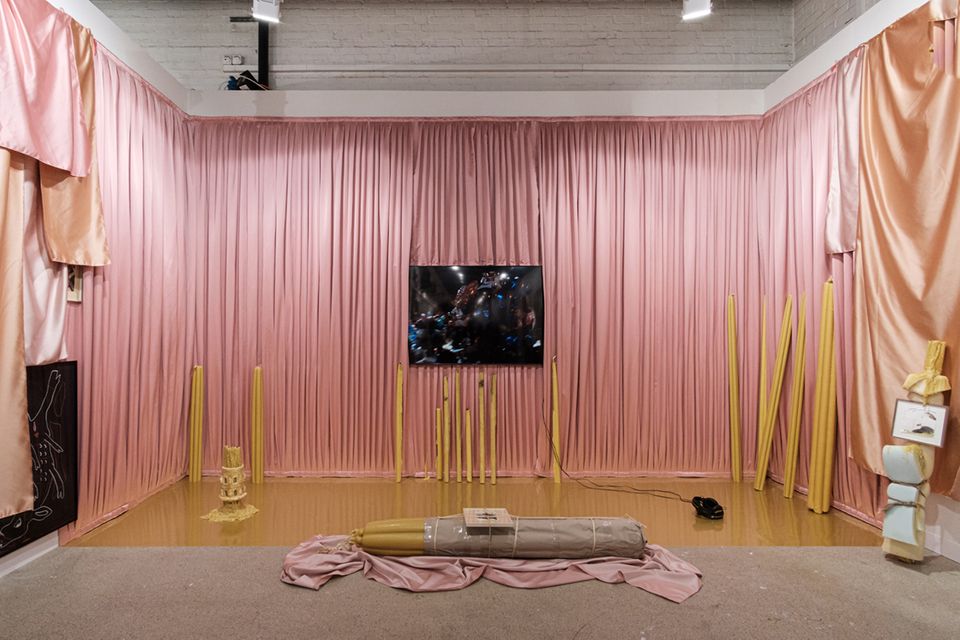 Elmgreen: We discovered Pauline when she was nominated for the 2019 Preis der Nationalgalerie in Berlin. She involves herself deeply in her subjects for her videos and subjects and looks at rituals and the wider world from a bold new feminist perspective. In this film and installation work you see masculinity in another way. We also like that the gallery has dared to do a bold booth, which makes Art Basel less fair and more art. 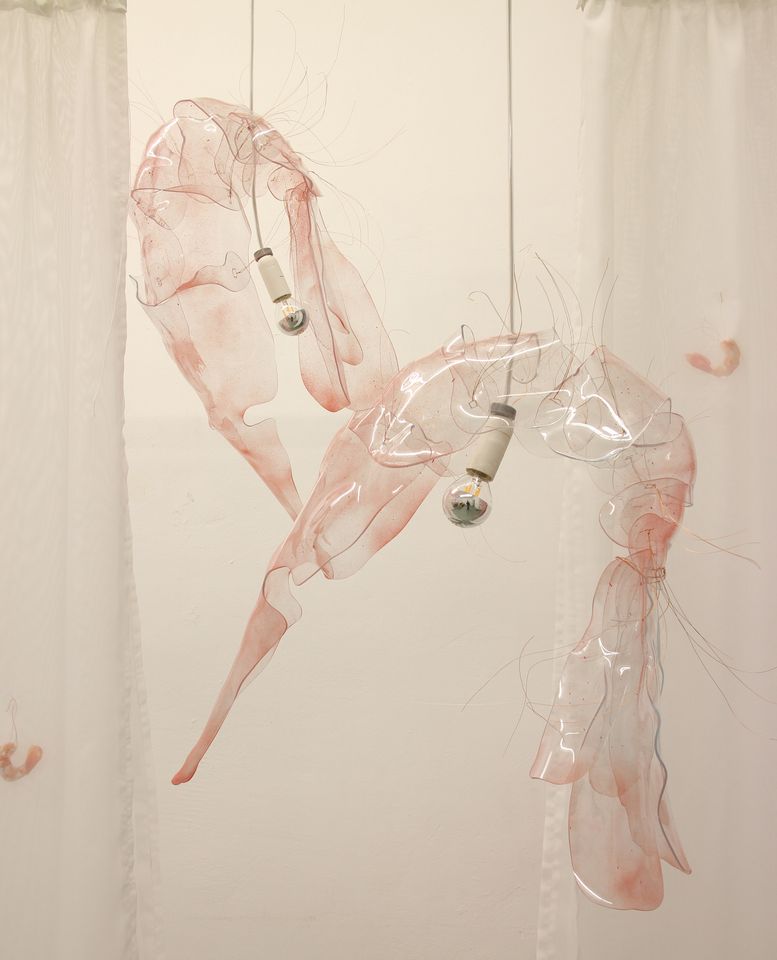 Kasia Fudakowski’s Its clear to me now, albeit decidedly too late, that we might not have always seen things from the same perspective, (Raw) I, (2021)
Courtesy of Chertluedde

Elmgreen: What you see here is this oversized shell of an eaten shrimp that’s now become a lamp, cast in plastic and hand painted. It is both practical and highly impractical. Kasia has a wonderful, subtle sense of humour, which is why we bought an edition very similar to this work. And of course we like artists who are funny. Maybe Kasia’s work is funny in a different way to us, she’s perhaps less interested in political structures and thinks more about interpersonal relationships and human beings and the collapse of language. Whereas we comment more on social structures.

Dragset: Yes, just look at the title of the work: Its clear to me now, albeit decidedly too late, that we might not have always seen things from the same perspective—this piece really speaks to a collapse of communication. 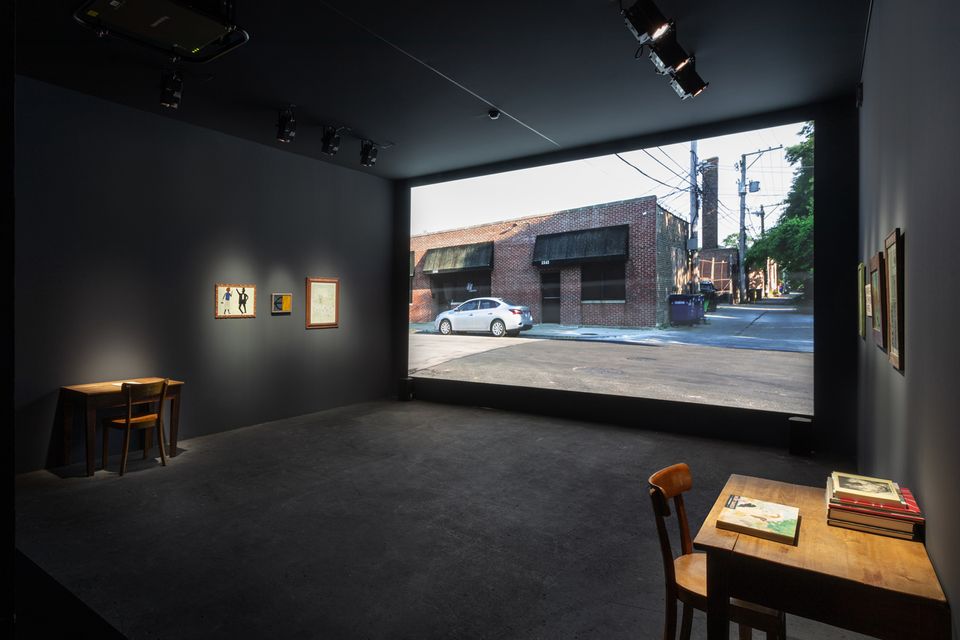 Dragset: In the film installation PLACE (2020), James Benning recreates the paintings of Outsider artists such as Bill Traylor and Henry Darger and we like that he is celebrating and resurrecting the work of marginalised artists and promoting overlooked positions.

Elmgreen: Yes, often in the art world when people are asked to select a group of artists they’ll usually choose mainly men and then perhaps one woman. So now that we have the opportunity to promote some artists in the press we wanted to do the reverse and have four women with just one old white man.