Check the skyline of Rome. Maybe it’s an urban legend that no building is allowed to top St Peter’s Basilica — nothing higher than the House of God — but it’s a fact that the vista is significantly skyscraper-free. So the six-storey Palazzo della Civiltà stands out all the more. The huge square box, ringed with symmetrical arcades carved out of travertine marble, dominates the landscape as Benito Mussolini, who commissioned its design in the Thirties, always intended it would. But now, in the third decade of the 21st century, it’s the headquarters of Fendi, an Italian icon of a different stripe, and its architectural splendour has indirectly inspired a collection of men’s fashion.

I’m staring at Silvia Venturini Fendi on a screen, and behind her, I can see a slice of those arcades and an expanse of blue sky, and she is saying, “It’s exactly this place that has become more and more my point of view since our references have become as limited as our freedom. It’s like an observatory on the world. When you look from the windows, you see everything in microscale. It’s a very different landscape, a very different Rome. Here, you see the city and the traffic, but you also see the mountains and the sea. Everything is in a small, small scale.”

The prints of her new men’s collection reflect that bird’s eye perspective. What looks to me like a Jackson Pollock scribble is an old map of Rome, revisioned in an artisanal way, “with some landmarks as points of reference,” Silvia adds. “I introduced the Palazzo Fendi and lots of little FF’s here and there, where there are buildings that belong to the company or people and places that we love.” The other print comes from aerial views photographed from space, earth and oceans abstracted so that they could almost be a new animalier pattern. The exigencies of Covid-19 meant that Silvia had to shut down the on-site cinema where she’d usually show her staff the celluloid inspiration of the moment, so, this season, it migrated to her mood board, which was all about Close Encounters of the Third Kind. “I was thinking that this palazzo is like a spaceship to me,” she clarifies. “So the idea was looking at things from above.” It has, of course, been a long-time dream of hers to cast off the planet’s mortal coil and head into space.

Silvia’s new collection offered her another opportunity to lose herself in the heavens. “The starting point was really to reproduce the colour I see from these huge arcades and windows,” she says. “This place is so strong from an architectural point of view but it’s also very strong in terms of the connection you have with nature, especially with the sky. The Roman sky is something quite special. The colour changes so much during the day. There is this hint of lilac, violet, purple and pink. And there are different shades of yellow mixed with icy blue.” That was more than enough to inspire a colour palette.

And after the skies of Rome come the winds, more than you could ever imagine, eulogized by philosophers and poets from Seneca onwards. Silvia’s favourite? The Ponentino, the afternoon breeze. “Thank God we have it because it’s going to be more than 40 degrees this weekend, but with this wind you will survive.” Hence, the collection’s airiness, the lightness of its linens, silks and sheer nylons, the sandalness of its footwear. “What is beautiful is when the models walk in the wind, especially on the rooftop. You can see the inside of the clothes. You know that at Fendi the inside is as beautiful as the outside — or at least as unexpected or carefully thought out as the outside. So even with the reversible suede trench coat, you’ll see that inside there is a glove leather lining in a different colour.”

Models walking in the wind… Silvia is talking about the video her son-in-law Nico Vascellari has made to accompany the launch of the collection. When it became clear that the ongoing pandemic still wasn’t allowing live shows, it was obvious to Silvia that the digital representation should be filmed in the Palazzo della Civiltà. “It’s the place where everything takes shape,” she says. “I thought it would be a nice homage to the DNA of the house to show this place from different perspectives, to reshuffle a bit the perception of things.” So we are shown a day in the life, starting at dawn with the models walking through the arcades. Then, as the light changes, they slowly, steadily ascend to the roof and, as night falls, they are suspended against the sky, walking on the rim of the rooftop balconies in a perverse defiance of any health-and-safety regulations. 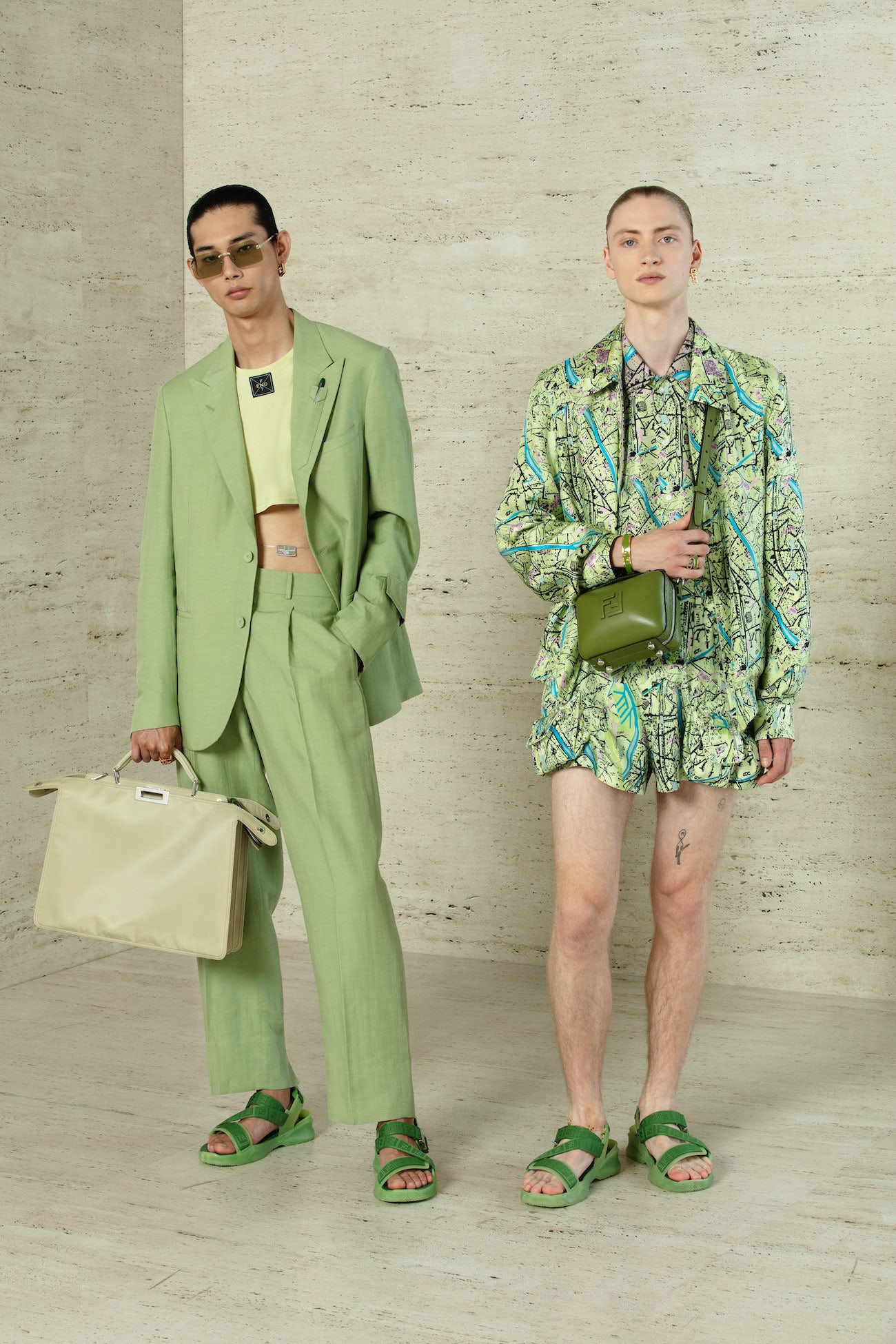 Of course, that risk, that hint of wilfulness, appealed to Silvia. It’s one aspect of her own personality that she has successfully infused into the family brand. And it’s glaringly obvious in the truncated jackets, shirts and T-shirts, chopped across the chest with a laser-sharpness. “The world has been shrinking lately, so I said, ‘Let’s shrink a bit the proportions,’” she says with a butter-wouldn’t-melt ingenuousness. “I wanted this man to be free, and to push a bit this freedom that is more important than ever to me.” If the polarising impression is male disco bunny, it does glaringly illuminate the dialogue between past and future that has spiced Silvia’s Fendi. She feels that the juxtaposition of incompatible elements is something intrinsically Roman. Hence, the stop-start conversation between casual and formal in her new collection. “The suits and jackets are made in the lightest fabrics so they have this attitude of comfort,” Silvia says, “even if I’m so fed up with the word, because we’ve been so ‘comfortable’ for so many days and months. But you can wear these jackets even with shorts, and they have two splits on the side so you can reach your pockets very easily. And they are very functional. They have even a pocket on the left arm for your mobile, and they have a little pen on the lapel, to combine technology and heritage again. A pen is always useful. I think it’s nice to combine effortless clothes with something quite classic.”

Silvia may insist she likes simple clothes, clothes for real life. But at the same time, she has never been able to resist a big poke at convention. (Parse a couple of decades of Fendi’s men’s shows, Ziggy Stardust and all, and you’ll see exactly what I mean.) That’s because she is possessed, as I have said a hundred times, by an imp of the perverse. Consider, for example, the baby baguette some of her models are carrying in the new video. It is slung from a belly chain, she announces gleefully. At the same time, she points out it is a real bag. Small as it is, it actually opens. There are also extremely short shorts which have more pockets than a bag. “When you’re a bag specialist, you can’t avoid doing that,” says Silvia.

She maintains she can’t imagine going back to the way things were before the pandemic. The effect such thinking had on this collection is appropriately intangible. “It was really conceived to be seen in movement, through a movie,” Silvia says. “Otherwise, you would have been obliged to sit here in a chair for a whole day.” So, from the start, she imagined the clothes as costumes for a film. That gave her time to think about the images she wanted to send, and how, when you are making a film, you can change the story as you like, rather than, as with a fashion show, being strictly bound to one idea in real time. “When you do a movie, you can change the perspective. You can start from the finale instead of starting from the beginning. So you have more freedom.”

Freedom is something that’s clearly on Silvia’s mind, not just because the end to a year of lockdowns may be in sight, but also because she has an inspiring new work relationship with Kim Jones, who took over design duties at Fendi’s women’s collections in the wake of Karl Lagerfeld’s death. “I always love to confront myself with other people,” she says. “This is something that I probably learned from Karl. I like to nourish myself with other people who have different kinds of experiences.” Jones’s first collections for the brand have introduced a cinematic spirit of languor and elegance which entrances her. “I like that he’s given a lot of insights,” she agrees. And will Silvia take those on board for her men’s collections? “My mind is so always open, the influence is there, that’s for sure.” There may even be a commercial imperative because, as Silvia says, it’s success that allows her the freedom she loves. “At the end of the day, this man and this woman have to go out together in the street.”

“Can you see them doing that?,” I wonder. “Little by little,” she answers. “Knowing them, they look at each other, and maybe one day they will meet.” And we’ll all probably be there.

The BoF Podcast: Silvia Venturini Fendi Will Surprise You