After the turmoil of the pandemic, will we live a new années folles, like after World War I, in a frenzy of fringes, jazz, modernism and speed? This is a growing belief in fashion, if only because we want compensation for the deprivation and sadness brought by Covid-19.

Alber Elbaz, who debuted his joyous, charming and very of-the-moment ready-to-wear project AZ Factory on the Paris couture calendar, believes we would be better off calling the coming cycle les années smart, because technology has made us, well, smarter. Has it?

One way or another, the all-digital haute couture week which closed on Thursday spoke to a widespread hunger for something special — from simply beautiful to just plain crazy. It was a dichotomic season, split between a new realism of sorts, with a focuson daywear and seemingly normal clothing on one hand, and expressive fantasy dressing on the other.

Folie, ultimately, leads to reason. Or is it the other way round?

Save for a few exceptions, what the season lacked was warmth, even love. The general temperature of the collections was cold, distant, unemotional, like they were created in a post-human vacuum, despite the fact that, at least on paper, emotions were part of the message, or the message itself. Showing digitally via the flat glare of video certainly did not help, though it was not just about the medium, but the intention and the final execution.

Despite the devilish perfection of its scene-setting machine, there was something claustrophobic about the glass, book-filledlabyrinth that served as a set for the Fendi show: it turned models into taxidermy. Kim Jones’ debut as the artistic director of womenswear at the revered Roman house was eagerly awaited and certainly delivered a punch in terms of its star-studded cast of friends and family. Each look was tailored to the personality of the model, because this is what couture is about, but in the end, it felt contrived; the flou not always flowing. The marble draping on Naomi Campbell looked particularly clumsy, and the tailoring kind of geometric, rigid even, bending on the body rather than moulding to it, similarly to what Jones does for Dior menswear.

Bloomsbury to Borghese was the show’s title: a merging of Jones’ Sussex roots and Fendi’s Roman grandeur, which was given a tangibly Byzantine spin à la Romeo Gigli, minus Romeo’s lightness. For being so personal, the effort felt a bit distant, and the androgynous theme culled from Virginia Woolf’s Orlando carried in quite a literal way in the merging, or collage, of tailoring, draped dresses and togas, worn by both men and women. But this was a debut, and as such it deserves to be read as a first step into a new world. It was interesting to see the very Italian idea of family morph into a more British concept of clan, or tribe, while the feeling of female empowerment through glitz was certainly a message of continuity. At Fendi, women rule: they always have and hopefully they always will.

The irrational took the lead, in a costume-y kind of way, at Dior, where Maria Grazia Chiuri explored Monsieur Dior’s proclivity for divination in a movie, devised once again with master of fantasy Matteo Garrone, titled Le Château du Tarot and filmed amongst the eclectic, even deranged architecture of the Castle of Sammezzano in Tuscany. Tarots, as symbolic as they are eye-catching, instruments probably more apt for self-exploration than predicting the future, were the inspiration for both the visual tale — eerily meaningless or foggily symbolic per Garrone’s take on storytelling — and the clothing.

This was a very solemn, high-waisted, slightly medieval, ethereal and ultimately kitsch Dior, with a few sharply tailored pantsuits thrown in for good measure. But in the end, the format came to the detriment of the clothing, which could only be seen as costumes. That said, Chiuri has mastered a certain kind of gracious femininity and turned this into a tangible Dior signature with great success, and she deserves kudos for that. 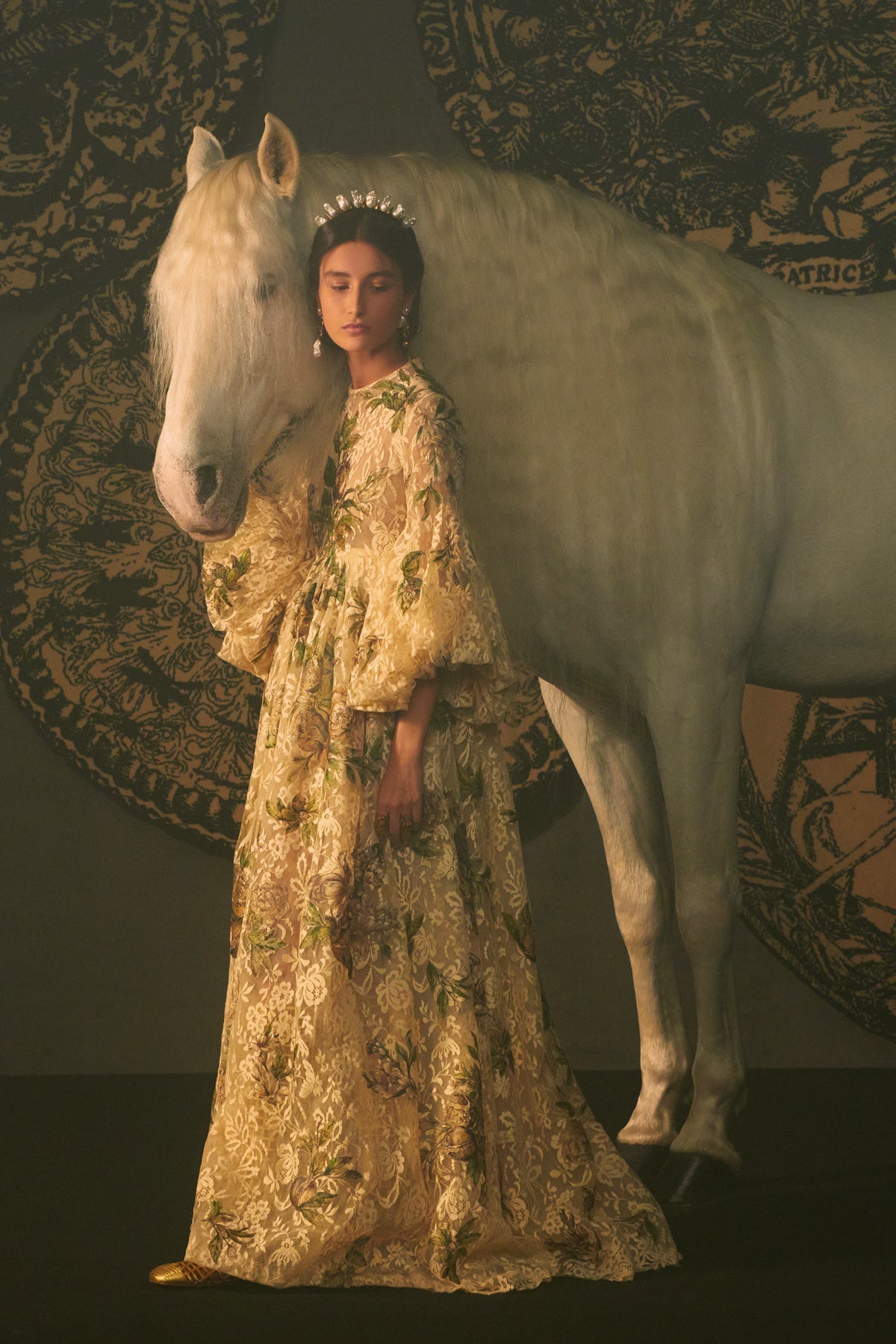 Giambattista Valli is another couture escapist: his fantasy world, however, is inhabited by oh-so-real, fun-loving party girls. Here, sharpness meets drama and a flavour of Sixties extravaganza — Vreeland, Barzini and the good old days of American Vogue — is always palpable. This season the Andalusian tale of ruffles and larger than life hair had both craziness, glamour and some contemporary légéreté.

Otherwise, sparkly was the way forward. Olivier Theyskens was all silver at Azzaro; crystals shone in bonkers fashions at Area; and Viktor & Rolf staged a veritable rave in upcycled tulle, sequins, glitter and lug-soled boots. But the Dutch duo’s outing had a homemade feel, as if the urge to party again was stronger than the perfection couture demands. While the energy was warm and positive, the result fell flat. That’s the thing with Viktor & Rolf — their collections go from a stellar to forgettable (and even despicable) from season to season, and you never know what to expect, which is also part of their charm.

Surrealism took on a cartoon-like, muscular tingle at Schiaparelli, where Daniel Roseberry is quickly turning into the couturier of choice for the glitterati, the Instagram attention grabbers with millions of followers and the TikTok generation. His take on Schiap is certainly not subtle, but what it lacks in finesse it makes up for in visual boldness and humour — it certainly isn’t cold. Elsewhere, the feeling of artistic chaos ran through Charles de Vilmorin’s colourful debut: part Koos Van der Akker, part Niki de Saint Phalle, totally amateur. Meanwhile, artist Sterling Ruby presented a new S.R. STUDIO. LA. CA collection as a special guest on the couture calendar. With all the bleaching, the rough handwork, the prairie shapes, the Hamish hoods and assorted Americana, it was a continuation of Ruby’s fashion debut at Pitti Uomo two years ago, but with a focus on women. Yet, it did not have the same bolt of electrifying energy and felt a little repetitive. As an experimental artist, Ruby could have done a wonderful job in clashing couture and bleach, but he played it safe.

Realism, of the magical kind, was the other main story of the season: couture for the everyday, on an elitist scale. Mr Armani is a realist, a soulful pragmatist. He has always been and always will be. The collection he showed on the Paris calendar was initially meant to be unveiled in Milan in the frescoed rooms of his very own Palazzo Orsini, but due to the latest wave of Covid, it became a video. Pas mal: the video was poetic and concise, while the collection was light and remarkably seasonless, an amalgamation of ethereal dresses and faultless pantsuits that felt quintessentially Giorgio. The message, in Armani’s words, was as straightforward and effective as “beauty.”

At Chanel, realism took a domestic tingle: family gatherings en plein air, generations mingling, easy dressing. Virginie Viard keeps stripping down the output of the house to something less fantastical. In her doing so, there is no shortage of nice clothing, but it all feels like stuff. Her couture collection had no narrative — the fashion message absent. 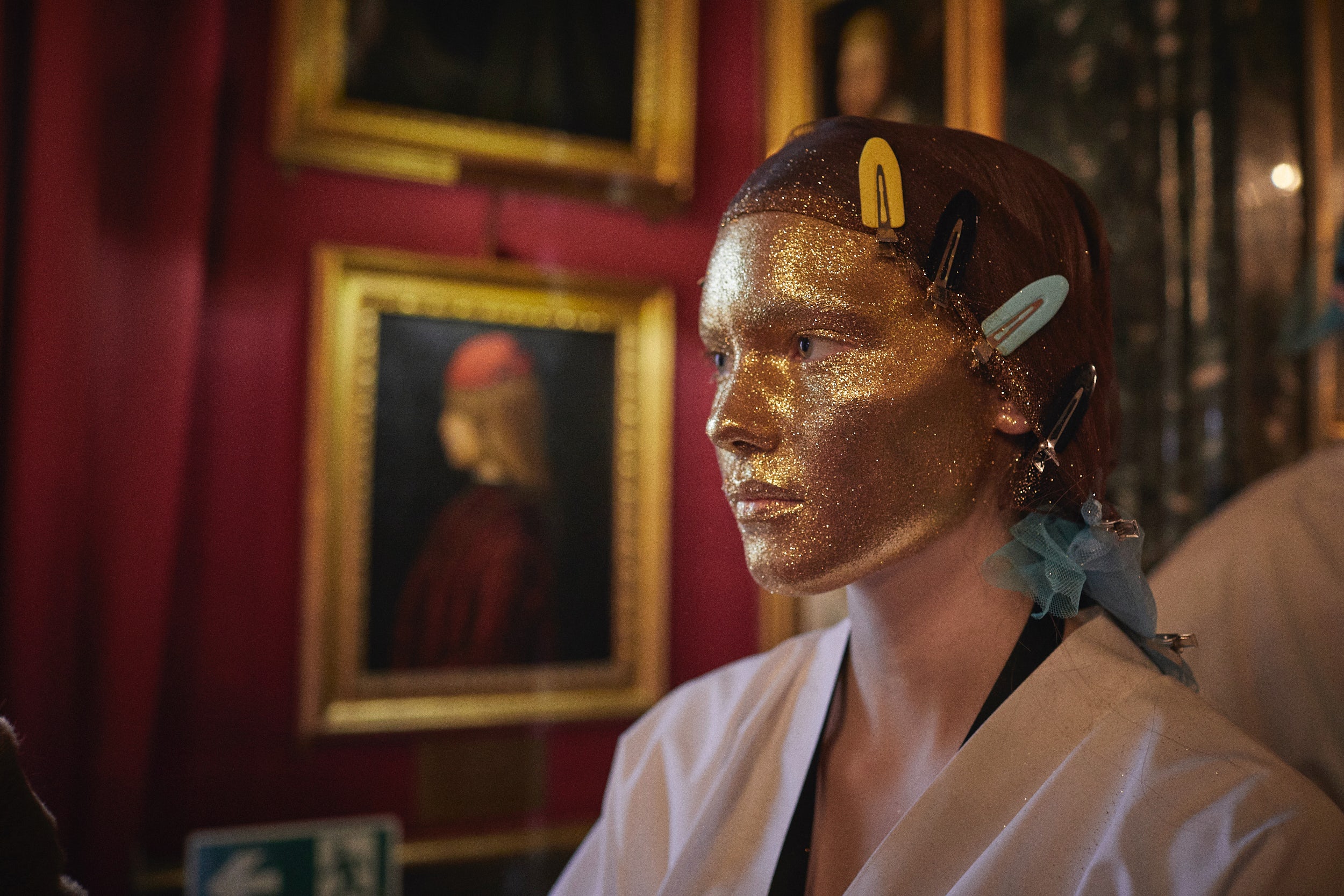 Finally, Pierpaolo Piccioli, one of the most sentimental designers working today, delivered a puzzling vision of what a couture wardrobe should look like in the present tense. Interpreting realism as a radical act of formal deprivation — no prints, no grandness, no romance, no gender — while working on an unremittingly vertical line, made even longer by the long lanky hair and towering platforms recalling the footwear favoured by Venetian courtesans and drag queens, and mixing acrylic brights with cold neutrals, Piccioli made an abrupt about turn.

All the poetry and the sentimentalism of the past evaporated. Stripped down to the essence, almost post-human in its faultless sheen but intensely human in the precision of its execution, it was a vitreous outing with a futuristic feel. The show was filmed in the baroque frenzy of Rome’s Galleria Colonna, but the image was so distant and polished, the Massive Attack soundtrack so hypnotic, that it felt like it was streamed from another planet, where temperatures drop dramatically below zero.

In the virtuoso, hyper-real polish of it all, with the flame at times barely perceptible behind the ice, this was couture that said a lot about the present moment, about our collective will to turn into machines to survive turmoil, not yet knowing how to reshape our feelings and sentiments. For now, the mechanical has won, though the human is fighting to fire itself up again.

Inside Alber Elbaz’s Return to Fashion