Long haunted by its reputation as “the sixth borough of New York” (thanks to actually sustainable living conditions and affordable rents), Philadelphia has come into its own of late in terms of historic art institutions and, increasingly, a unique kind of upstart energy. Artists are experimenting with their own gallery-like spaces, new museums are being built, and the pandemic has further fostered a spirit of collaboration that is driving the city’s art scene forward.

After two decades of planning and four years of construction, Frank Gehry’s comprehensive facelift of the interior of the 93-year-old Philadelphia Museum of Art finally reached completion and, as of a reopening in May, now shows off nearly 90,000 square feet of reimagined and newly created space. The project is nothing short of transformational, bringing to light parts of the building that have not been seen in ages: a 640-foot-long corridor known as the Vaulted Walkway, for example, has not been open to the public for nearly 50 years. Most important, the rethinking created 20,000 more square feet of exhibition space. 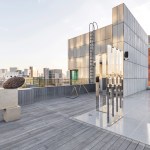 The museum is using its reopening to throw a spotlight on local talent. In one portion of the new galleries, curator Erica Battle has put together a show of work by 25 Philadelphia artists, including Alex Da Corte and Odili Donald Odita, who created a huge new mural for the museum. “It’s been a really fascinating moment to take the pulse of the city and see what people are creating,” Battle said. “So much is happening.” Five years ago, she said, choices for openings and events were slim—until the city changed and “suddenly there was a multiplicity of perspectives and activities.”

Combining a focus on local energy with showings of the institution’s world-class collection can elevate the Philadelphia Museum’s status as a destination and a hometown hallmark too. “The relationship between Philadelphia-based artists and the museum is something we really care about,” Battle said. “We see the show as a continuation of that relationship.” Timothy Rub, Philadelphia Museum director, concurred: “It’s important to say we recognize that Philadelphia is just bursting with creativity today.”

A Spirit of Experimentation—and Nimbleness

While reliable standbys like the 50-year-old Locks Gallery show heavyweight artists like Lynda Benglis, Jennifer Bartlett, and Pat Steir, Philadelphia today is defined more by artist-run spaces than by New York–style commercial galleries. One of the most intriguing experiments these days is Conceptual Fade, a tiny space with big ambitions. Just 135 square feet in size (maximum occupancy: five people), the space is the brainchild of conceptual artist Tiona Nekkia McClodden, who two years ago won the Whitney Museum’s coveted Bucksbaum Award for her work in the institution’s high-profile biennial. McClodden has said her inspiration came from the Pyramid Club, an all-Black-led private social club founded in North Philadelphia in the 1930s that held an annual art exhibition; she opened her space in February with a show of work by jazz bassist Jymie Merritt, who died last year at 93. She saw a mix of visitors: “musicians who knew Jymie, folks who are aware of my work, and art world folks—many from New York, surprisingly, who have taken trips to see the space.”

Conceived as a three-year experiment, Conceptual Fade will continue to present exhibitions centering work by Black artists across forms and media, McClodden said, as it expands its library and develops the structure for a residency program for local and regional writers and curators. “The goal,” she said, “is to have [it] be a place that allows for study most of all.”

Experimental spaces aren’t the province of artists only. Philadelphia Contemporary, a roving project founded in 2017 by former Aldrich Contemporary Museum director Harry Philbrick, had made plans two years ago for a brand-new architect-designed building on the edge of the Drexel University campus. But the plan changed to repurpose an existing Philadelphia structure. (When ARTnews went to press, Philbrick was in contract negotiations for a location not yet announced.) The reasoning behind the move, he said, wasn’t financial, or at least not primarily. He put it down to matters of accessibility and sustainability. Adaptive reuse, Philbrick said, would allow the Philadelphia Contemporary to be energy-neutral. And to be located somewhere other than a university campus would decrease the intimidation factor and allow the institution to engage a wider public. “The evolution of thought was about wanting to be as accessible as possible, on the one hand, and on the other, to be responsible citizens.”

Mutual support over the past year has helped Philadelphia’s smaller and specialized institutions get through the pandemic while also building a stronger and more inclusive arts community. When lockdowns began in 2020, the directors of six institutions—the Fabric Workshop and Museum, Taller Puertorriqueño, Woodmere Art Museum, Philadelphia Contemporary, the African American Museum in Philadelphia, and the Asian Arts Initiative—began holding weekly Zoom meetings. “What links us is that we are all midsize, and all focus, to one degree or another, on working with living artists,” said Harry Philbrick, Philadelphia Contemporary director. “Beyond that, we’re radically different organizations.”

Initially focused on pressing financial issues, the talks led in many different directions. One long-term goal, Philbrick said, is for the organizations “to expose each other to each other’s audiences, to really try to get those different communities.” The talks also led to the institutions now working together on a fellowship focused on diversity, and a grant program. “Two years ago, if you [had] brought all these organizations together and said, ‘Let’s share our audiences,’ there [might have been] be a kind of defensiveness,” Philbrick said. These days, instead, “everybody is much more open to the idea of collaboration.”

The Philadelphia Museum’s expansion isn’t the only exciting news for Benjamin Franklin Parkway, the boulevard that is home to the city’s museum district (and famous as the site of Rocky’s run in the 1976 movie for which Philly is still known). Across the Parkway from the Barnes Foundation and the Rodin Museum will soon be a Herzog & de Meuron–designed museum devoted to the work of Philadelphia-born artist Alexander Calder. Calder’s grandson Sandy Rower, who runs the New York–based Calder Foundation, has said it will not be a typical museum. “This will involve a different way to engage art than what is usual with a museum,” he told the Philadelphia Inquirer. (Delayed by the pandemic, design plans are currently in development.) In the meantime, the city has said it is working on long-term plans to redesign the Parkway to make it more hospitable to cyclists and pedestrians.

A version of this article appears in the June/July 2021 issue of ARTnews, under the title “The Borough of Its Own: Philadelphia.”