An 1887 painting by Vincent van Gogh, which has never before been exhibited, sold for €11.2m (€13m with fees) at Sotheby’s Paris. Although the work was fresh to auction, this was its second time under the hammer, having been nearly sold less than an hour before.

Scène de rue à Montmartre (Impasse des deux frères et le Moulin à Poivre), depicting a Parisian street scene, carried an estimate of €5m-€8m ($6.1m to $9.8m). Aurélie Vandevoorde, the head of the Impressionist and Modern Art department at Sotheby’s Paris, fielded offers in a 10-minute-long bidding war that emerged between specialists Nicolas Chow in Hong Kong and Samuel Valette in London. But as the bid came to €12m, an online buyer swooped in. Despite banging the gavel at €13.5m to Valette, Vandevoorde quickly retracted, as the online bidder had apparently secured the painting at €14m (€16.2m with fees), seemingly in the nick of time.

But several lots later, Vandevoorde announced that the sale would be reopened at the end of the auction. A Sotheby’s spokesperson later confirmed this was due to a “bidding error”. Both Valette and Chow stepped back in the ring, but this time the third online bidder was nowhere to be found. After a speedier round, Valette’s phone bidder secured the work for more than €2m less than they offered in the first sale attempt.

The work was sold in conjunction with the Parisian auction house Mirabaud Mercier.

The vendor belongs to the same family that bought the work in 1920, likely from either one of Van Gogh’s artists friends, or Père Julien Tanguy, a paintseller who sold him materials and also stored many of his pictures. Read more on the painting in our weekly Van Gogh blog, written by our expert Martin Bailey. 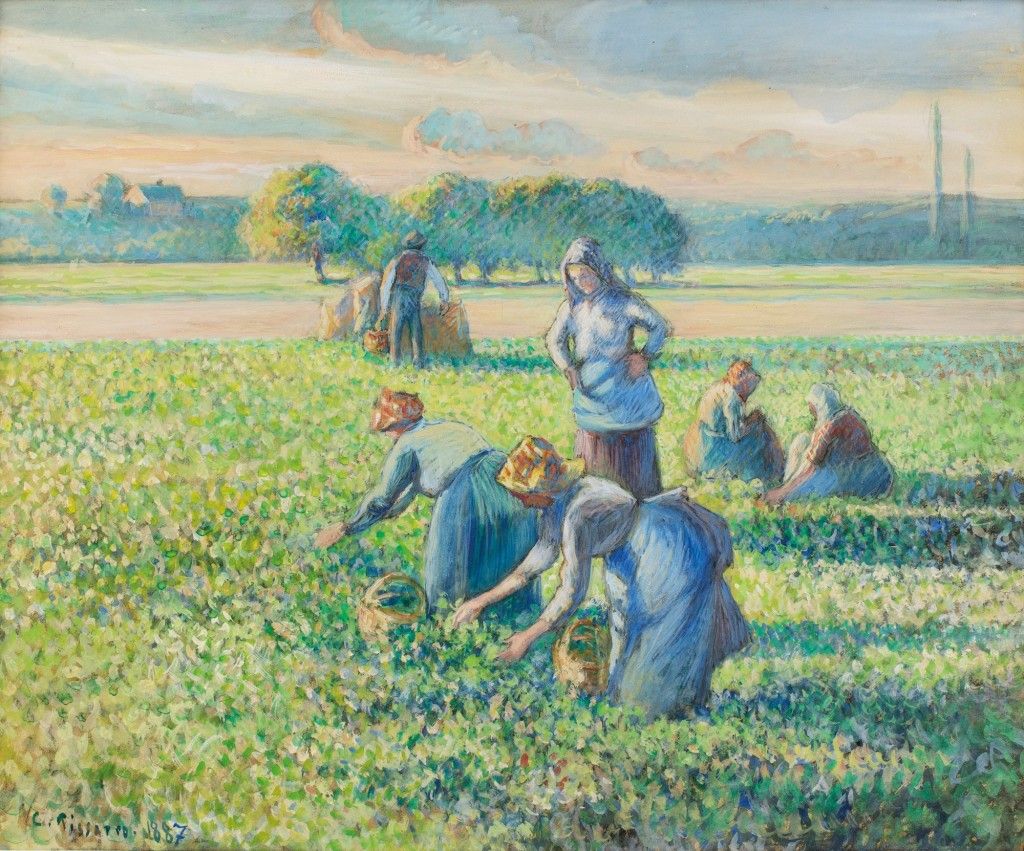 Several other works performed well in this Impressionist and Modern sale, which formed the first half of a relay auction with London. These included a Nazi-looted work by Pissaro that made €3.3m (with fees) against a high estimate of €1.8m and a racecourse painting by Jean-François Raffaëlli from the Polignac Foundation that hammered for €240,000 against a high estimate of €80,000.

Overall the Paris sale brought in a healthy €37m ($43.8m with fees) against a high estimate of €28.9 ($34.1m, calculated without fees). The virtual gavel was then handed over to Oliver Barker in London for a cross-category “Modern Renaissance” sale in London, in which works by Impressionist Edgar Degas were offered alongside contemporary pieces by Matthew Wong in the new, strange normal of boundary-less auctions.

The most anticipated works were a pair of Edvard Munch paintings, both deaccessioned from German museums during the Nazi period and later sold back in Norway. The first, executed in 1926, was the first self-portrait by Munch to come to auction in more than a decade, but hammered below the low estimate, at £4.3m ($5.9m, with fees). The second, a ghostly beach scene from 1904, fared far better. It sold to an Asian collector, following underbidding from Sotheby’s Old Masters team, and made £16.3m ($22.3m, with fees) against a high estimate of £12m.

This lengthy second half, which featured bidding in unwelcome increments of £5,000 for a painting by Jean Fautrier, saw records made for four artists. This includes the early Czech abstractionist František Kupka, whose 1922 work Le Jaillissement II (Tryskání II) was on the auction block for the first time, making £7.6m ($10.3m, with fees), triple his previous record, and the Iranian artist, Bahman Mohasses, who made his evening sale debut with a monumental minotaur painting consigned by the Bruni family (of Carla fame), which achieved £1m ($1.4m) against an estimate of £350,000 to £450,000.

The final tally, accumulated after five hours, stood at $176.2m (with fees), well above the $120.5m high estimate (calculated without fees), a figure made more impressive considering that three seven-figure works were withdrawn before the sale, including a 2012 Mark Bradford painting and a 1962 work by Yves Klein. 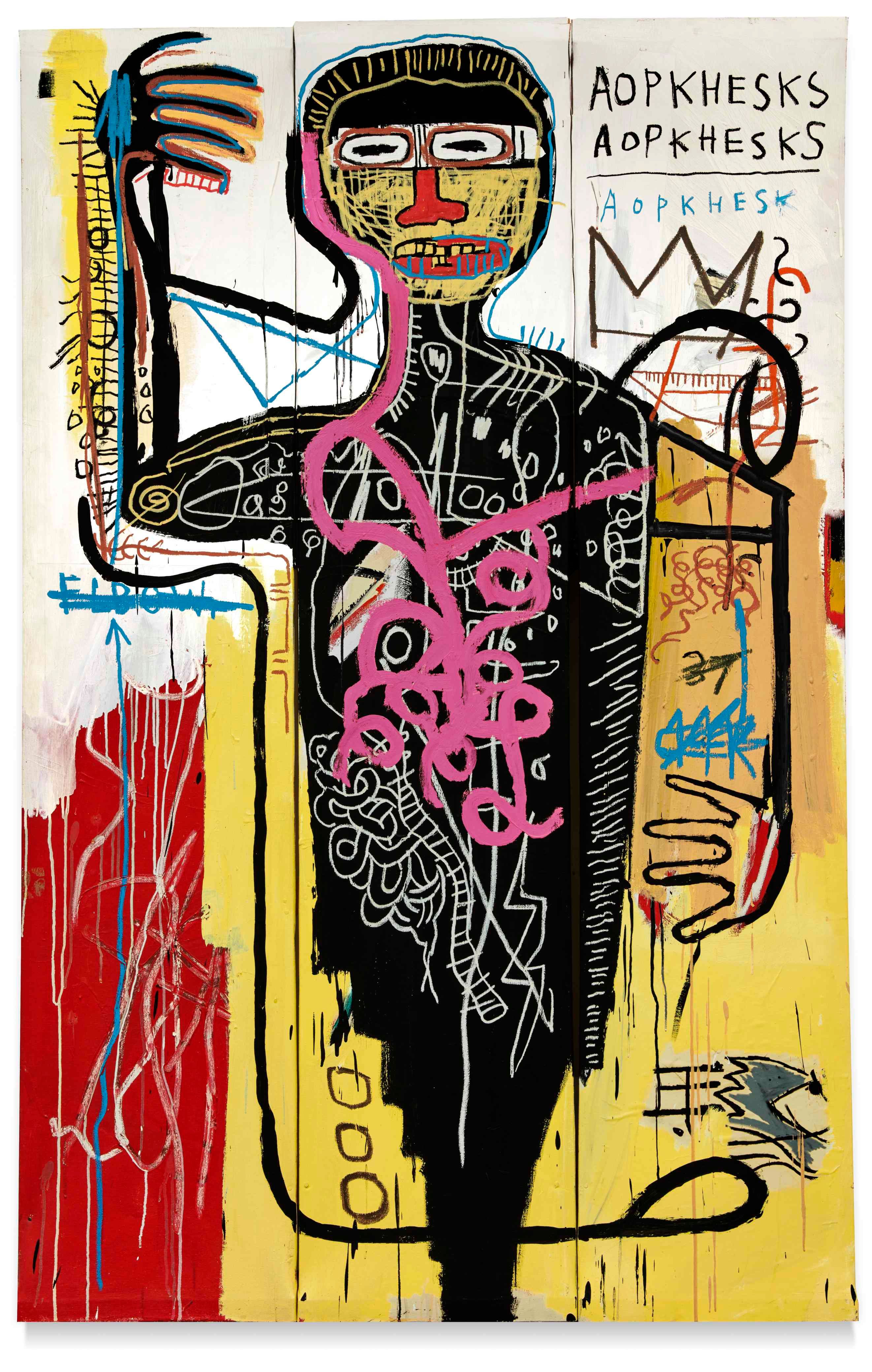 But before viewers were dismissed, Sotheby’s had one last surprise up its sleeve (no, not another recalled painting). Not to be outdone by Christie’s, it will offer a never-before-auctioned Basquiat at its May Evening sale, made when the artist was just 22 years old, with a hefty estimate of $35m to $50m. The announcement, coupled with tonight’s strong results, have set the bar high for the upcoming marquee spring sales in New York. As Sotheby’s was keen to remind viewers, this is the most expensive Basquiat they will have offered since Untitled (Head) (1981) four years ago in New York, which made the artist’s record of $110.5m.