The online art market has been a rare winner during the Covid-19 pandemic, with rising totals and many new buyers starting their collections digitally.

But online selling platforms should not expect buyers to show much loyalty, according to the part two of the Hiscox Online Art Trade Report 2020 (released today), produced in collaboration with ArtTactic.

The report compares activity between March and September 2020 with activity in the same period last year and finds that, in the first eight months of this year, online only art sales at Sotheby’s, Christie’s and Phillips more than tripled, totalling $597m, compared to only £168m for the whole of 2019. Over two thirds (67%) of the 552 collectors surveyed bought art online between March and September, up from 44% in 2019, and—with little else to do—72% of respondents have found themselves browsing online sales platforms weekly (54% in 2019).

Robert Read, Hiscox’s head of art and private clients, says of the findings that “after so many false dawns” he was “relieved to see that that online art trade has taken off and more importantly it has been the lifeblood that has allowed dealers and auctioneers to survive the pandemic. Without it the list of casualties would have made grim reading.” 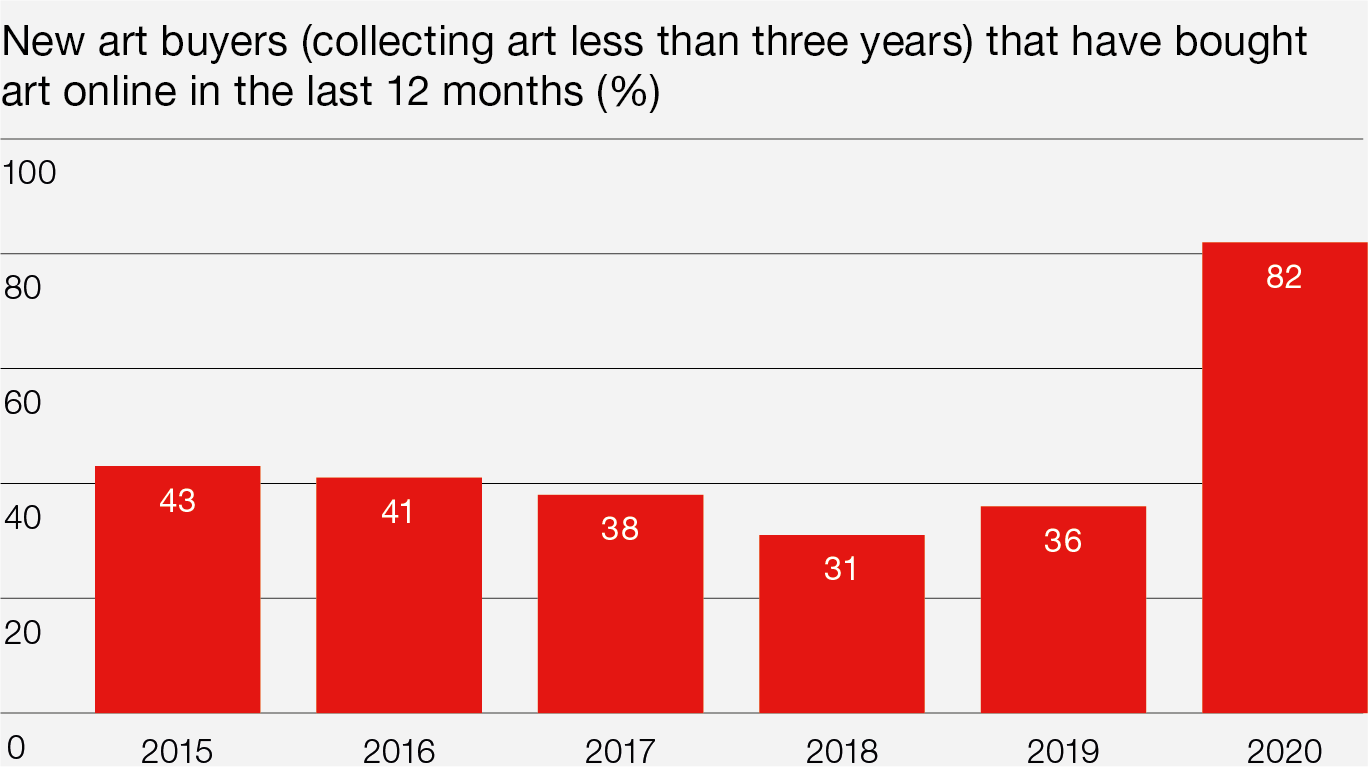 A huge 82% of new art buyers have bought works online in the past year, according to the report
Courtesy of his cox and ArtTactic

The party line amongst auction houses is that the rise in online sales is largely driven by new buyers who find this an accessible entry point to the market. Younger, millennial collectors (much fetishised by the art market) have also been actively buying online during this period, the report finds, with 69% of under 35s buying online during this period (40% in 2019) and two thirds (66%) of those buying between two and five works of art since the pandemic started (7% bought more than six pieces). What the report refers to as “novice” collectors (defined as those who have been collecting for three years or less) led the online buying spree with 82% making purchases March to September. This is up significantly from 2019 where the comparable figure was 36%;

However these much desired fresh digital collectors are a fickle bunch when buying online—according to the report, nearly half (47%) of new art buyers said they “never” or “rarely” felt any loyalty towards the online platforms they bought from, up from 40% in 2019.

That said, they are keen to stress their civic minded support for struggling artists—76% of millennials and and 78% of new collectors said this was an important motivation for spending between March and September. A quarter of respondents (25%) said they had bought pieces directly through Instagram in support of fundraising campaigns, most notably the #artistsupportpledge.

Instagram’s rising dominance as both a buying and research platform for art buyers is unavoidable—a quarter of respondents used Instagram to buy art during the period of March to September, with millennial buyers (35%) and new art buyers (38%) particularly active. Most (87%) use it to discover new artists. There has been some debate as to whether Instagram could threaten the traditional structures of the market but Read says he sees it “as lubricant to view and promote sales but the actual selling will revert to the platform, and I don’t see it as a problem for the market long-term.”

On 2021, Read says: “I expect that after a turbo charged year for the online art market we will start to see some consolidation as a few platforms emerge as clear leaders. I also expect there to be increasing levels of comfort amongst buyers to trade online albeit we will also all enjoy the return of the physical market, it is just that they are going to be much more evenly balanced.”