Art Basel has offered galleries—such as König Galerie , owned by Johann König (seen bowling in the Messeplatz in 2017)—a 10% discount on stand prices to reflect difficult business conditions and higher shipping costs
Courtesy of Art Basel

Marc Spiegler, the global director of Art Basel, has just listened to an episode of the Ezra Klein podcast, on the extended mind. “It’s about how humans are trained to think not in a linear, static way, but in a moving, physical way. It’s about learning to take notice of what we call intuition or gut feelings, and reading body signals as cues when interacting with others. The way your mind works differently when you’re walking as opposed to when you’re sitting.”

There, in the interview preamble, Spiegler sums up why the return of real-life art fairs, where we wander/interact/­studiously avoid people, is so needed by an intuitive industry weary of online viewing rooms (OVRs)—a “linear, static” experience if ever there was one.

Spiegler is preparing for Art Basel to return to the Messeplatz (24-26 September, preview days 21-23). When we spoke in early August, his team were still working out the floorplan, “normally done two-and-a-half months before the fair takes place”, as galleries hesitate to confirm plans. The company has had to “lay off about 10% of our staff”, Spiegler says, although it was “fortunate that some of our losses were covered by insurance” and benefited from government support in Basel, Hong Kong and the US. The team has been busy, though, holding ten OVRs since March 2020 and launching a podcast, Intersections, in July, hosted by Spiegler—for a podcast addict who listens at 1.2x speed to get through more of them, it seems his natural territory. 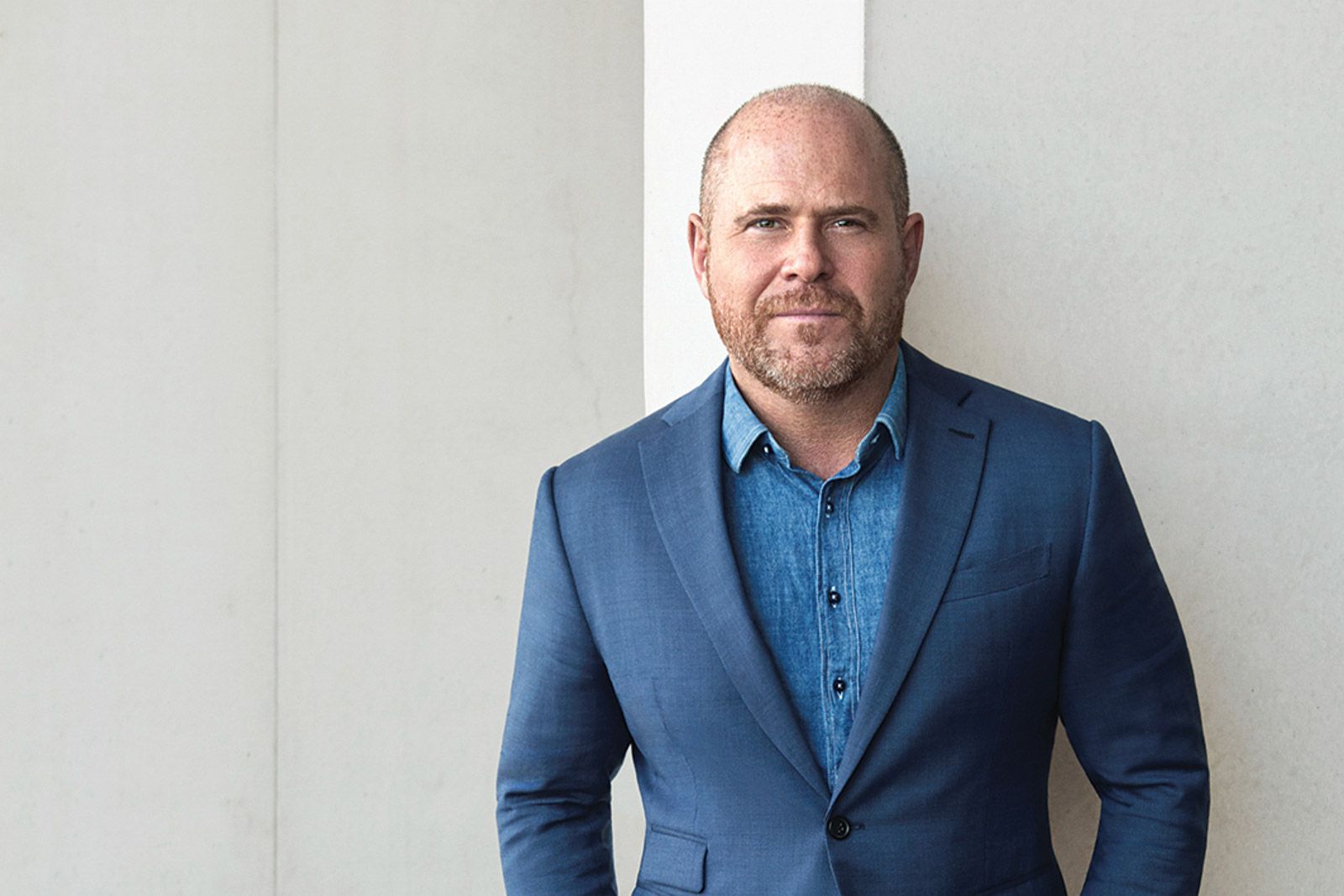 “Uncertainty is the predominant theme of our lives, for anyone running any kind of physical business… and, obviously for us, the complexity is that a lot of galleries are deciding whether or not to ship works to Basel,” Spiegler says. “So, we had an initial [application] deadline of 1 June, which we pushed back three weeks.” During those weeks, Switzerland relaxed its travel restrictions, and attendance on VIP days can remain the same, but the public days will be cut by 20% (all visitors will need to “be fully vaccinated, supply a recent negative Covid-19 test or have proof of sufficient antibodies due to recent recovery from Covid-19”, according to an Art Basel statement.)

In the past month there has been increasing uncertainty surrounding the fair. Art Basel has been keen to reassure galleries, despite harshening international travel restrictions and complicated Covid policies within Switzerland. The fair has now introduced one-off initiatives that Art Basel’s director Marc Spiegler tells The Art Newspaper are “extraordinary measures for extraordinary times”. First, Art Basel has pledged to foot the bill for any necessary hotel quarantines and second, it will establish a CHF1.5m ($1.6m) “solidarity relief fund” that will be apportioned out to any galleries disappointed with their sales at the fair—more on that later.

Despite the last minute nerves, the event is still expecting 272 exhibitors, some of which will share a booth with another gallery (there are six joint booths, including The Approach bunking up with Kate MacGarry, Bergamin & Gomide with Galeria Luisa Strina, and David Nolan Gallery with Sperone Westwater), or take satellite booths. Others will participate in the new feature section, called Wunderkammer, of small exhibitions within another’s booth—for instance, Galerie Jocelyn Wolff’s stand will host Take Ninagawa’s presentation. There are 24 first-time participants in all, including Ben Brown Fine Arts, Bridget Donahue, Company Gallery, Garth Greenan Gallery, Kasmin, Venus Over Manhattan, Emalin, LambdaLambdaLambda and Edouard Malingue Gallery.

The Unlimited section returns—with 62 large-scale works curated by Giovanni Carmine, the director of the Kunst Halle Sankt Gallen—as does Parcours, with 20 site-specific projects across the city, curated by Samuel Leuenberger, the founder of the non-profit Salts in Birsfelden, Switzerland. The artists Monster Chetwynd and Cecilia Bengolea take on the Messeplatz commission, creating two “performative interventions”.

A change in tone

Anyone who has read Art Basel’s communications to its galleries during the pandemic will have noticed a marked change in tone. Once, the institution spoke in an almost clinical voice from its ivory tower. But that seemed ill-fitted to a pandemic. “There was a time when what we expected of ourselves, and frankly what galleries expected of us, was to be authoritative and very clear in our communication,” Spiegler says. “I remember in March 2020 writing a letter to our exhibitors and giving it to my team and saying, ‘before you look at this, you should know that the tone is very different to what we’ve done in the past’.” He believes “a certain humility, empathy and transparency are essential in communication [now]…Telling people what we know and what we don’t know.”

But can Art Basel maintain its position while admitting that it, too, does not have all the answers? Spiegler is adamant: “You can’t be humble and arrogant, but you can be authoritative and humble. The only way to stay a market leader is to stay close to your galleries.”

The company has given all exhibitors (except for Satellite and Wunderkammer participants) a 10% discount to reflect the tough business environment and higher transport costs. It also promises full gallery refunds if it has to cancel the Basel fair due to the pandemic—the same commitment was made for the Hong Kong fair and applies to Miami Beach in December. That, Spiegler admits, is “an incredibly risky position to take, but it’s the only reasonable one for us. I don’t see anyone getting insurance for pandemics this year. Quite frankly, we felt that if we didn’t offer that reassurance, then a lot of galleries wouldn’t take the risk with us.” He continues: “There’s a saying that you can dance in the rain or wait for the storm to stop. Some fairs have cancelled, but we’ve chosen to take the risk, because it’s important for our galleries.”

After growing concerns about international travel to Switzerland last month, a number of powerful US-based galleries wrote an open letter to Art Basel suggesting that the fair be cancelled. Art Basel responded with its own letter saying it remains committed to going ahead but will offer concessions to exhibitors, including rolling over booth fees to 2022 if they cannot enter the country and offering staff to man virtual stands.

Spiegler acknowledges the stressful situation and says Art Basel can “understand why some galleries are suggesting we should cancel the fair.” He adds, “to be frank up front, the current conditions are not what we had hoped for when we rescheduled the fair to September. At the same time, many other galleries and collectors have reached out to stress the importance of doing the show under the circumstances”.

James Murdoch’s company, Lupa Systems, bought a majority share in MCH Group, Art Basel’s parent company, in late 2020. Spiegler says: “James is actively engaged as a board member in how MCH Group and Art Basel can be more successful—he’s opening his knowledge and contacts to help us do that.”

For now, Spiegler has one eye on Art Basel in Miami Beach in December, which he will oversee “in the short term” before another director of Americas is found to run the event following the swift departure of Noah Horowitz, who resigned from his post in July and joins Sotheby’s this month, as Art Basel opens.

And as for the possibility of another fair, Spiegler thinks the market is saturated: “I don’t think the world needs another art fair right now.” Although, “we’re always open to possibilities”.