When it comes to selling art, it seems Christie’s does not play by the rules—even its own. After going through the trouble earlier this year to establish separate 20th- and 21st-centuries sales categories, the auction house has smushed the epochs back together for its June marquee European sales.

Dubbed the 20th/21st century London to Paris Sale (but confusingly also incorporating the 19th-century too), this hybrid in-person and online relay auction started in London with 52 Impressionist, Modern and contemporary works, before crossing over the English channel for a two-pronged sale. First, French advertising magnate Francis Gross’s collection, which included a Picasso collage and Giacometti bust, much of which had not been seen for 30 years. This was followed by around 20 abstract or semi-abstract works by blue-chip artists closely associated with Paris such as Pierre Soulages and Jean Dubuffet.

Although touted as “evening” sales, this too was a misnomer, as they were held in the European afternoon. This was, as Christie’s chief executive Guillaume Cerutti later confirmed in a post-sales press conference, to accommodate the participation of Asian buyers, who are snapping up Western works at a frenzied pace. Cerutti described this sales season as receiving “historic levels” of Asian bidding, which well surpassed the usual 30-35% regional share, though he declined to give specific figures as of yet.

Overall, the sale made £153.6m (with fees) selling 90% by lot, with the London portion raking in £119.2m (with fees), squarely within the pre-sale estimate of £93m to £136m (all estimates are calculated without fees), giving Christie’s its “best summer season since 2017”. From London, only one lot, Banksy’s Love Is In The Air (with stars) (2003), was withdrawn and 17 lots, or around 30%, were guaranteed either in house or by a third party, meaning they were effectively bought pre-sale. No Paris lots were guaranteed. To commence, Jussi Pylkkanen took the rostrum in London with the live-streamed sale rooms of “New York to his right and Asia to his left” and the virtual viewers (well into the thousands) likely watching other competitive sports in the background. Leading with punchy contemporary works, the sale was off to a strong start. A 2016 Stanley Whitney grid painting nearly tripled its high estimate to make £525,000 (with fees), going to a phone bidder via Hong Kong director Elaine Kwok and making the artist’s record. Then The Palm Reader III (2019) by New York-based Pakistani painter Salman Toor, who is quickly becoming a new evening sale staple, hammered for £270,000 to London specialist Joanna Hattab—a remarkable price for an artist who received his first (and so far only) museum show last year, but well shy of his record price of £640,000 made three weeks ago at the Philips-Poly joint contemporary evening auction in Hong Kong. Two lots later, a 2009 Yayoi Kusama polka dot pumpkin sculpture attracted a number of phone bids (though less than the “dozen” that Pylkkanen claimed were vying for the work). After battling between three Asian bidders it went to a client of Hong Kong specialist Eric Chang for £2.6m (with fees), comfortably over its £1.8m high estimate.

Those that fared less well include Lucian Freud’s Plate of Prawns (1958) that hammered below estimate and made £922,500 (with fees), and a museum-quality 1959 Piero Manzoni Achrome work that had been in the same private collection for 40 years, which hammered at £2.2m against a low estimate of £2.5m with just one bid. Works by Matisse, Cy Twombly and an Egyptian landscape by Winston Churchill were among those that failed to sell. Pylkkanen then handed the gavel over to associate specialist Veronica Scarpati for her evening sale debut. The first of three women to take the rostrum that night, she oversaw the sale of a painting by Edgar Degas of a bathing nude that slipped past its £1.8m high estimate to hammer at £2.1m (£2.4m with fees). Two Chagalls later went quickly to Asian clients bidding through specialists in the Hong Kong phone bank.

When the sale transferred to Paris with its second female auctioneer Cécile Verdier at its helm, a technical glitch prevented virtual viewers from seeing the live action surrounding Paris’s top lot, Magritte’s La Vengeance (1936). However, figures were still seen to rise from the €5m (£4.3m) opening bid into the double digits, with the painting eventually hammering for €14.6m (£12.5m). This is the highest price realised for a work by René Magritte sold at auction in France, and the highest price paid at auction for a painting sold in France in 2021. A short while after, a Giacometti bust, Buste d’homme (Lotar II), depicting the photographer Eli Lotar, made €3.3m (£3m). 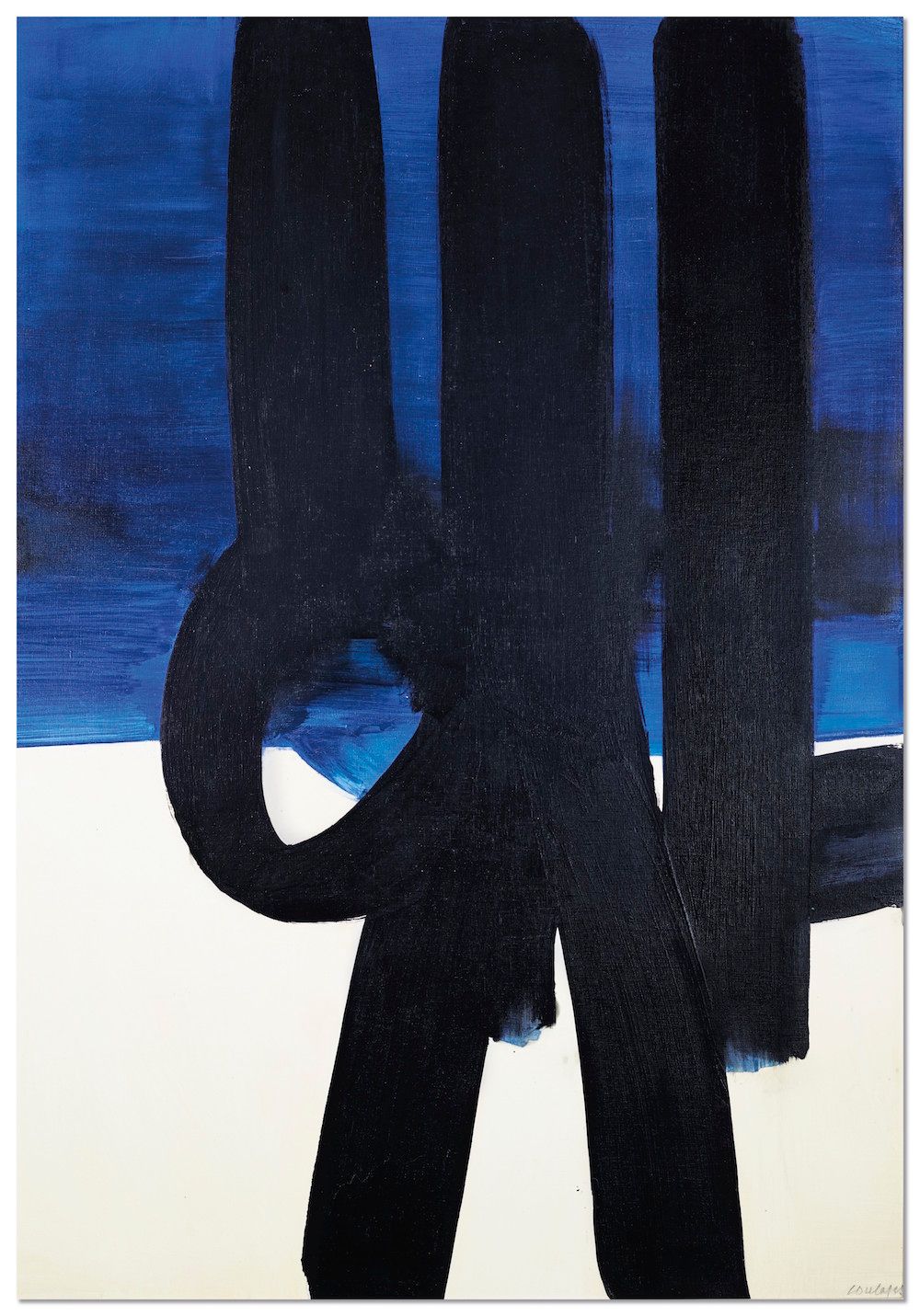 Highlights from the last leg of the sale, titled Paris Evening Sale, included two paintings by Pierre Soulages, one of which, Peinture, 46.2 x 38.2 cm, 1952 (1952) doubled its estimate to make £534,022. A trio of Warhol portraits depicting Roy Lichtenstein, Donald Judd and Frank Stella rounded off the auction, with the Liechtenstein portrait soaring past its high estimate of £80,000 to hammer at £170,000.

With the “post-pandemic” world tantalisingly close—at least for auction houses and the super-rich clients they cater to—evening sales are slowly beginning to settle into a new normal, that incorporates much of the changes the past 16 months have necessitated. As was made clear by all Christie’s executives after the sale, the hybrid in-person and online format is here to stay, having opened up interest from “several hundred people in a sale room to several thousand around the world”, Pylkkanen says. However, he adds that some aspects will remain the same as before, such as the dates of London’s marquee sales season. With the expected reinstatement of Art Basel and Masterpiece fairs (which have postponed and cancelled their 2021 editions, respectively) to the 2022 summer calendar, as well as May sales in New York and Hong being a perfect place to exhibit Europe-bound works, June is set to remain London’s key summer sales month.

And what of the merger between London and Paris? While one can speculate that this is likely to due to a lack of ample stock in either city, Cerutti says that the decision was made “to show solidarity between the two countries” and signal the ease of business between both cities post-Brexit. As the UK emerges not only into a post-pandemic world, but also newly alienated from its European neighbours, it will soon become apparent whether Paris is indeed London’s closest ally or increasingly, a necessary crutch.