Designer fashion brands have always catered to the cool kids, but that audience is getting younger and younger.

In the last month, Rejina Pyo and Fear of God both launched childrenswear. Self-Portrait, known for its lace party dresses, dropped its first kids collection Wednesday, and London-based luxury e-tailer Browns will launch an assortment of children’s clothes featuring more than 35 brands in July.

E-commerce platform SSENSE has dropped two exclusive sets of kids capsule collections since the beginning of May and has plans to roll out kidswear from 80 brands over the coming year. Mini-me pieces are already available from designers including Chopova Lowena, Doublet and Collina Strada. Some of the brands SSENSE plans to add to its offering already design for kids, but many are venturing into the category for the first time.

The trend for high-fashion kidswear represents a new stage of evolution for a host of brands that have built cult followings over the last decade. Many are eyeing the market as founders and creative directors start to have kids themselves, or see key consumers becoming parents.

Pandemic pressures are coming to bear too, encouraging brands to experiment with new categories in an effort to diversify revenue streams. Childrenswear in particular has proved resilient, and the success of luxury brands in the space has helped prove parents are willing to spend big to dress their kids in style.

Contemporary brands and the retailers that stock them see a gap in the market for fashion-forward items at a somewhat less eye-watering price point. For instance, not all parents will want their kids decked out in Gucci and Burberry, said Kristoffer Juhl, managing director of Copenhagen-based textile brand Tekla.

“Here in Scandinavia, we don’t see a lot of Baby Dior walking around — it feels like more of a niche consumer that buys into that,” said Juhl. The label launched sleepwear last year and will release its first kids styles in June.

Kidswear is a resilient market to bet on. Because children grow fast, products have shorter lifespans and need to be replaced regularly. Moreover, parents will often cut back on their own needs to maintain spending on their children, said retail futurist Doug Stephens. And that doesn’t just apply to necessities. According to market research firm Mintel, 44 percent of parents are happy to pay more for branded childrenswear, a figure that rose to 55 percent for high earners.

That’s helping to drive growth in the market’s value, even as birth rates fall in key geographies like China and the US, Euromonitor International data reveals. While sales fell during the pandemic, the research firm projects the global childrenswear market will hit $166 billion this year, rebounding to pre-pandemic levels. It’s projected to reach $182 billion by 2022.

Contemporary brands see an opportunity to appeal to a cohort of highly engaged consumers that want to dress their children in a way that reflects their aesthetics and values.

That growth potential is particularly appealing after a challenging year that saw apparel sales contract 22 percent, according to eMarketer. The appetite to expand into the children’s market mimics patterns seen in other categories that have proved resilient through the pandemic, said Tamara Sender, senior fashion analyst at Mintel. Just take the boom in fashion brands diversifying into homeware as another case in point (both Browns and SSENSE have also launched home goods in the last year).

Contemporary brands see an opportunity to appeal to a cohort of highly engaged consumers that want to dress their children in a way that reflects their aesthetics and values. Self-Portrait is hoping to grow its children’s offering to 10 percent of the brand’s revenue in the next three years. SSENSE said its range of gender-neutral exclusives and specially designed collaborations have had the highest sell-through rate since kidswear launched at the start of the month.

For some brands, the decision to launch childrenswear started at home, as founders and designers had children themselves.

“Our hope in doing kids is really, to selfishly provide solutions for my own kids, then narcissistically believing the rest of the world is looking for similar solutions,” said Fear of God designer Jerry Lorenzo, father to a ten-year-old son and seven-year-old twin daughters. Fear of God’s range of kidswear includes a line of fleece and jersey basics retailing for up to $150. 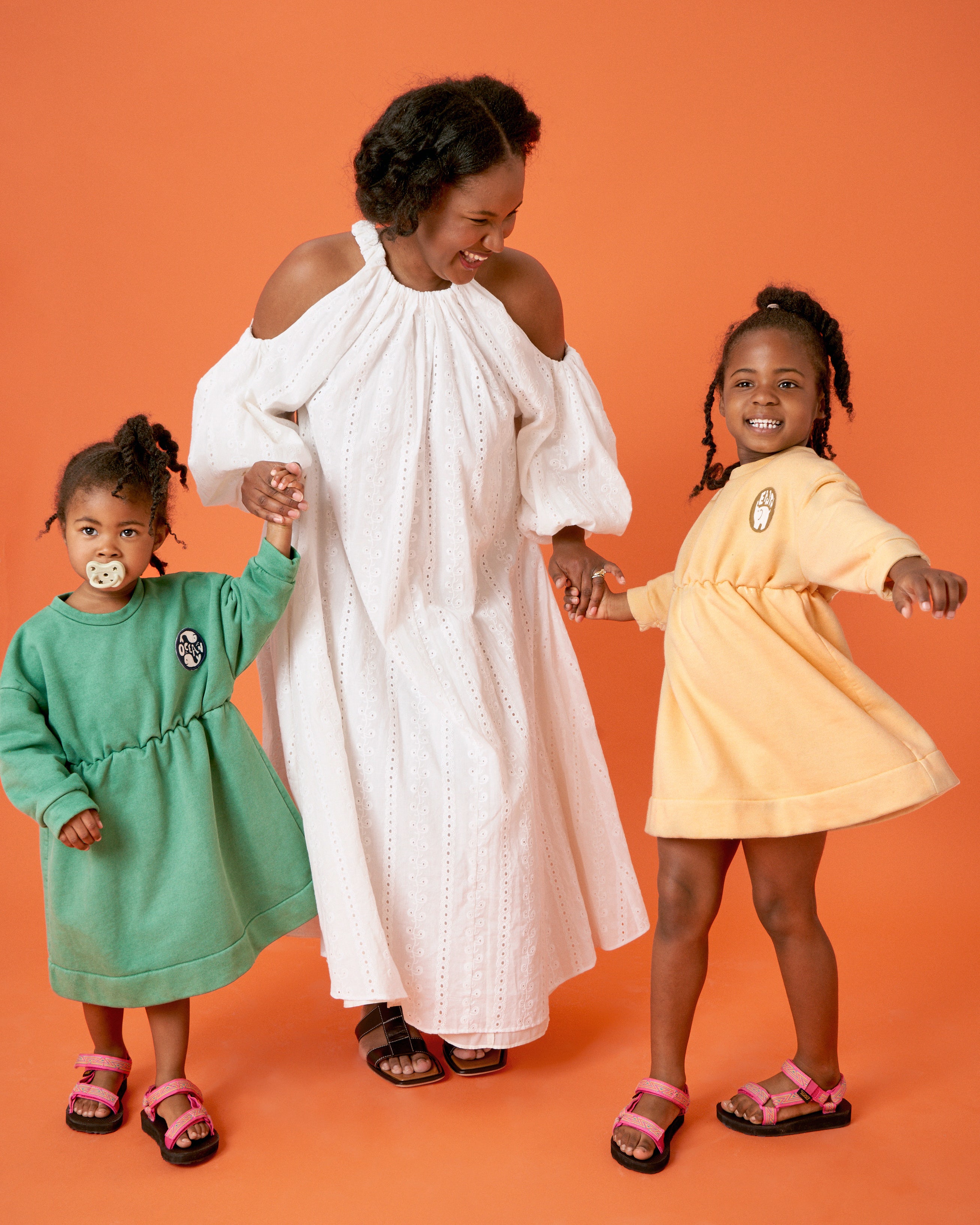 Similarly, London-based womenswear designer Rejina Pyo launched her kidswear collection this month after struggling to find the right pieces for her four-year-old, Luca. The collection features brightly hued separates with playful silhouettes in organic cotton, with prices going up to £125 (around $177).

“Trying to shop for something you love is really hard,” said Pyo. ”Conventional kidswear means blue for boys and pink for girls, and some cartoon characters. There aren’t a lot of options.”

The pivot is a bet that consumers will feel the same way as they hit similar life milestones. That’s something that pushed Self-Portrait’s creative director Han Chong to enter the space.

“We have such a loyal customer that’s grown with the brand and lots of them have a family now, so there’s demand for it,” said Chong. Self-Portrait’s childrenswear debut features 21 styles in sizes ranging from 3 to 12 years, with prices starting at £80 (around $113).

To be sure, a pivot to childrenswear presents unique challenges. Clothes for kids must meet strict safety regulations, adding an additional layer of complexity to the design and production process. Tekla added extra warnings to packaging and garment labels, and removed strings from kids pyjama pants to meet the requirements. “It’s everything that needs to be changed, to be honest,” said Juhl. 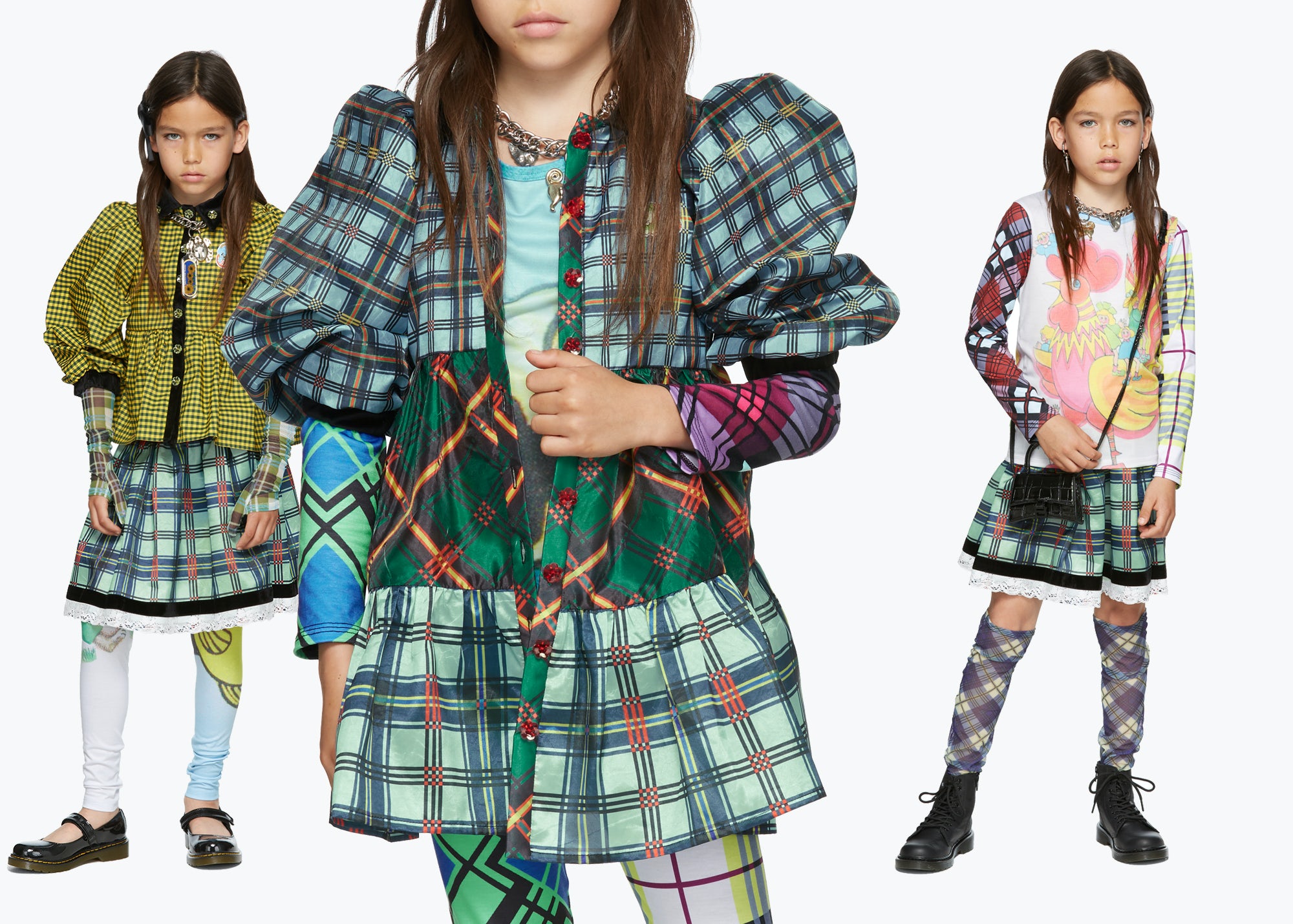 Pricing is another big challenge. The kidswear market is highly competitive, and no matter how dedicated a brand’s adult following, it’s still tough to compete in a growing market full of cheaper options for kids. Without major investors, smaller brands can’t launch with the same quantities, which in turn squeezes margins. “They are really tiny clothes but they can get expensive quickly when you make them really fun,” said Emma Chopova of Chopova Lowena, which designed eight styles for the SSENSE Kids launch.

Just ask Marta Bahillo, who founded Spanish knitwear brand Babaà as a kids’ brand in 2012, but has since pivoted to focus more on womenswear. The label’s price point was a hard sell to parents (its signature kid’s cardigan costs €130, or $158), particularly as fast fashion brands released similar styles made with cheaper materials. Childrenswear is “not where we get our money,” Bahillo said.

The new market entrants are proceeding with caution. Pyo described her range of childrenswear as “a passion project,” with no expectation “to turn a big profit quickly.” Brands launching capsules with SSENSE have the opportunity to test the water, a slow approach that Self-Portrait’s Chong is also taking.

“I kept this first collection very tight as it’s still a learning process … it’s very important to get the feedback from buyers and see what works before getting into it,” said Chong.

How Millennial Culture Is Driving the Luxury Kidswear Market

Yes, People Are Buying Couture for Babies. Here’s Why.